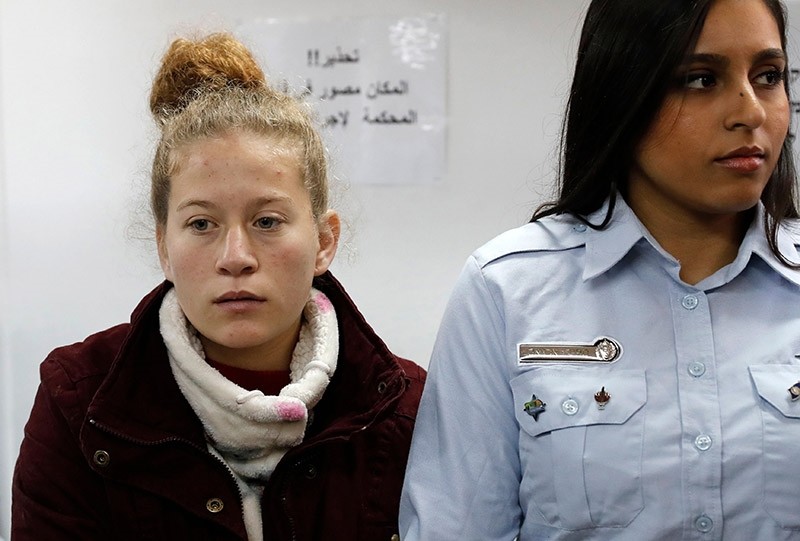 Ahed Tamimi (L), a 17-year-old prominent Palestinian campaigner against Israel's occupation, appears at a military court at the Israeli-run Ofer prison in the West Bank village of Betunia on December 25, 2017. (AFP Photo)
by Daily Sabah Apr 12, 2018 12:00 am

A video showing Palestinian teen activist Ahed Tamimi being harassed and threatened by Israeli officers during her interrogation has caused uproar after going viral on social media and news sites.

In the footage, dating back to December 26, the 17-year-old girl is seen sitting at a desk in front of Israeli interrogators, silently listening to the comments about her family and physical appearance.

The incident, which was first reported by the Daily News on April 1, took place after Tamimi slapped an Israeli soldier who raided her house and temporarily put her cousin in a coma after shooting him with a rubber bullet in the head.

The teenager, who was detained soon afterwards, is currently serving eight months in prison after serving three months in pretrial detention, and will have to pay a $1,500 fine.

During the interrogation, Tamimi repeatedly avoids responding to the two Israeli officers who urge her to cooperate by listing names from the teenager's village and threatening to detain them.

One of the interrogators then goes on saying "My little sister is blonde and her eyes are like yours. … When she goes to the beach, yeah? Like a hamburger."

The interrogators continue to harass Tamimi with teasing remarks such as "You have eyes like an angel."

Tamimi's lawyer reportedly filed a complaint with Israel's attorney general regarding the threats and harassment used during interrogation.

The 17-year-old girl comes from a well-known Palestinian family, which has been quite active in the West Bank protests over the past years. Many of her family members were either killed or detained during Israeli military operations.

Some 356 Palestinian minors were being held by Israeli authorities in detention centers as of the end of February 2016, Israeli human rights group B'Tselem said.

The Human Rights Watch published a report in 2016, citing bad conditions in Israeli detention centers where minors are reportedly being beaten and verbally abused.