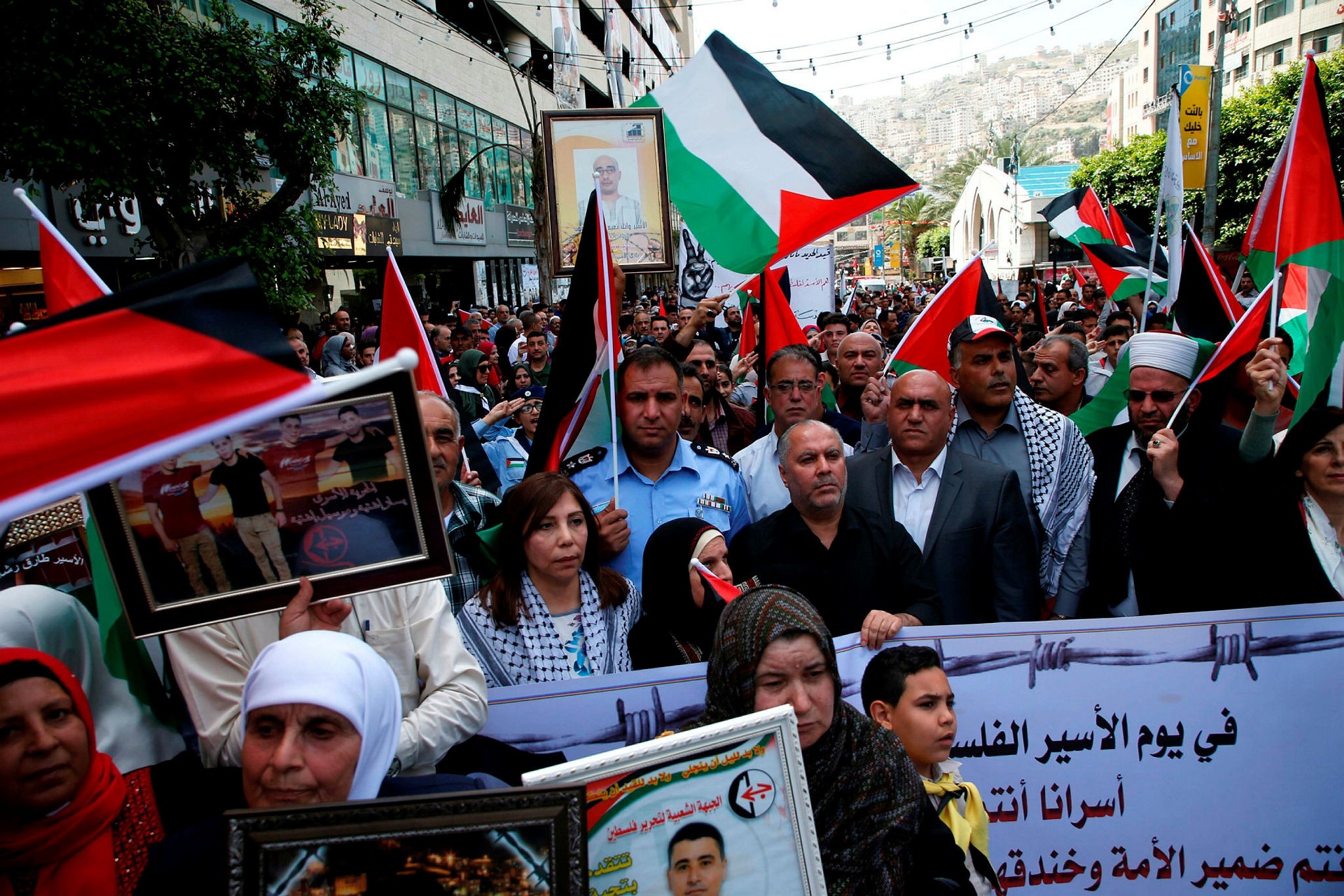 Palestinians hold portraits of relatives jailed in Israeli prisons as they protest to demand their release during a demonstration to mark Prisonersu2019 Day in the northern West Bank city of Nablus, April 17.
by Daily Sabah with AFP Apr 18, 2018 12:00 am

On Palestinian Prisoners' Day, Palestinians took the streets to mark prisoner's sufferings in Israeli jails as the number of Palestinians detained by Israel has hit to 1,928 since the start of this year, according to rights group

The rights group also said that around 1 million Palestinians have been detained by Israel since the country was founded in 1948.

Since the Israeli occupation, 215 Palestinian died in Israeli prisons. "Some 75 were killed after they were detained, 72 died from torture, 61 died of medical negligence, and seven were shot and killed by prison guards."

According to Palestinian figures, around 6,500 Palestinians are currently in Israeli prisons for a range of offenses and alleged crimes. Of those, around 500 were detained under the so-called administrative detention laws. The report also claimed that 700 of the detainees suffer from chronic diseases, which need urgent medical treatment and intensive follow up while 26 of them have cancer.

Several thousand people protested in the occupied West Bank and Gaza Strip yesterday to mark an annual day in support of Palestinians jailed by Israel. A few thousand gathered in the Gaza Strip, while there were smaller demonstrations across the West Bank.

Administrative detention allows Israel to detain people without charge or trial for renewable six-month periods. Dozens of girls carrying photographs of women prisoners demonstrated on Tuesday outside the headquarters of the International Committee of the Red Cross, west of Gaza City.

In Nablus in the northern West Bank, around 1,000 people gathered, while a few hundred demonstrated in Bethlehem and Ramallah.

A total of 350 Palestinian minors are currently languishing in Israeli jails, according to two Palestinian nongovernmental organizations. Eight girls are among those held in Israeli prisons, the Commission of Detainees and Ex-Detainees Affairs and the Palestinian Prisoners Society said in a joint statement.

According to the statement, six children were being held in Israeli juvenile centers. The statement was issued on the occasion of Palestinian Children's Day, which is marked on April 5 each year.

Israeli forces have detained 353 minors since the start of this year, some of whom were later released, the two nongovernmental organizations said.

In January and February, Israeli authorities issued house arrest orders for 102 minors, most from occupied east Jerusalem, the statement said. The two nongovernmental organizations appealed to international rights organizations to intervene to provide protection to Palestinian minors against Israeli practices.