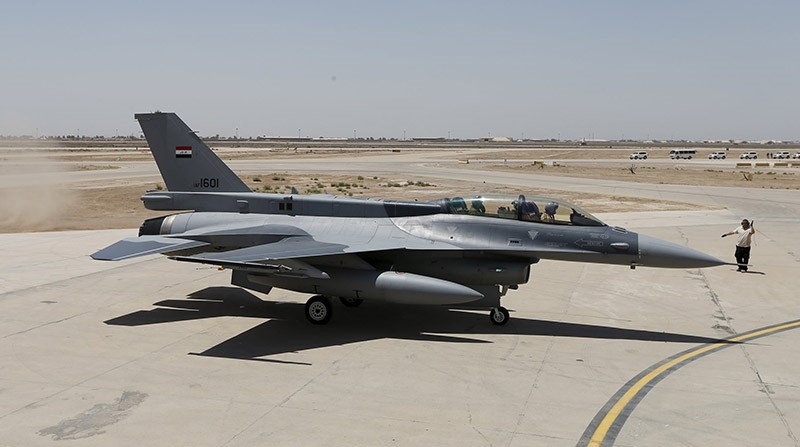 Iraqu2019s Defence Minister Khaled al-Obeidi (left) sits in a F-16 fighter jet, during an official ceremony to receive four of these aircrafts from the US at a military base in Balad, Iraq, July 20, 2015. (Reuters Photo)
by Compiled from Wire Services Apr 19, 2018 12:00 am

The strike against the terrorists was conducted on Abadi's order "because of the danger they pose to Iraqi territory," a statement said.

"The strikes against Daesh gangs in the Syrian territory is due to the threat these gangs pose to Iraqi territory, and demonstrates the increased capabilities of our valiant armed forces in pursuing and eliminating terrorism," read a tweet on Abadi's office account.

It added that these strikes "will accelerate the elimination" of Daesh's presence in the region.

The strikes on Daesh positions in Syria were carried out in coordination with Bashar al-Assad's regime, an Iraqi military spokesman told Reuters.

Iraq has carried out airstrikes against Daesh targets inside Syria last year.

Baghdad declared victory over the terrorist group in December with the help of a U.S.-led alliance, having retaken all the territory captured by Daesh in 2014 and 2015.

Cells believed to be linked to Daesh have since mounted scattered attacks in different parts of Iraq.