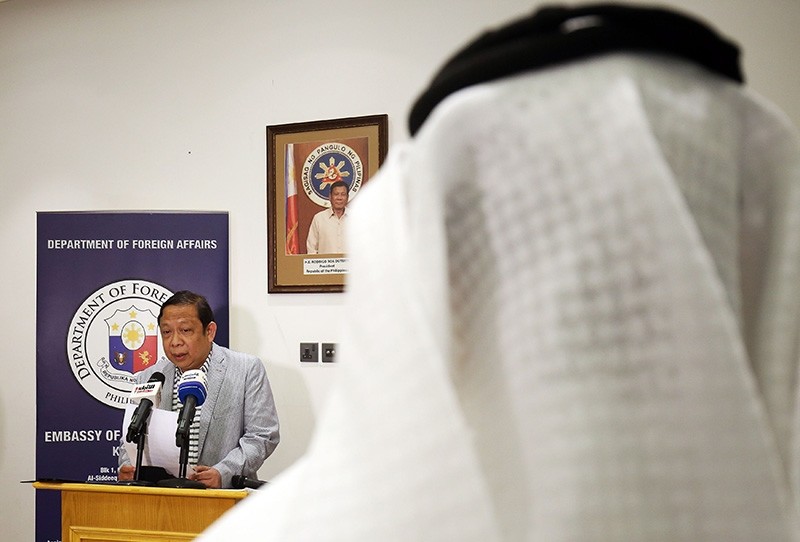 Filippino Ambassador in Kuwait Renato PO Villa speaks during a press conference at the Philippines embassy in Kuwait City on April 21, 2018. (AFP Photo)
by Associated Press Apr 22, 2018 12:00 am

Kuwaiti police arrested two Filipinos for allegedly convincing housemaids to run away from their employers' homes as the Philippines' ambassador faced questions for comments about his embassy's work in aiding abused workers, authorities said Sunday.

The arrests, reported by the state-run KUNA news agency, come as relations are tense between Kuwait and the Philippines, which sends many domestic laborers to the Gulf Arab emirate.

Already, the government of President Rodrigo Duterte has banned workers from heading to Kuwait over abuse cases, culminating in a February incident that saw a Filipina's body discovered in a freezer at a Kuwait City apartment abandoned for more than a year.

KUNA said Sunday the two Filipinos acknowledged convincing the maids to leave. It wasn't clear what law the two men were accused of breaking, though KUNA said the two "confessed to the crime in addition to other similar offenses that had been committed in various regions of the country."

The arrests came after Kuwait summoned the Philippines ambassador over comments he made that were reported in local press about the embassy's effort to rescue domestic workers who are abused by their employers. Ambassador Renato Villa was quoted as saying his embassy moves in to help the abused if Kuwaiti authorities fail to respond within 24 hours.

Villa's office said he was unavailable for comment Sunday.

Duterte in January complained that cases of abuse reported by Filipina domestic workers "always" seem to be coming from Kuwait.

There have been prominent cases of abuse in the past, including an incident in December 2014 where a Kuwaiti's pet lions fatally mauled a Filipina maid.

The Philippines banned workers entirely from Kuwait after the discovery of Joanna Demafelis' body in a freeze in February. In late March, Lebanese officials said 40-year-old Lebanese national Nader Essam Assaf confessed to killing the woman along with his Syrian wife, who remains at large. Authorities say Assaf faces a possible death sentence.

More than 260,000 Filipinos work in Kuwait, many of them as housemaids. Kuwait and the Philippines have since been negotiating for new rules governing Filipino workers there.

Philippine officials have demanded that housemaids be allowed to hold their passports and cellphones, which is normal for skilled workers like teachers and office workers. But many Kuwaiti employers seize their phones and passports.