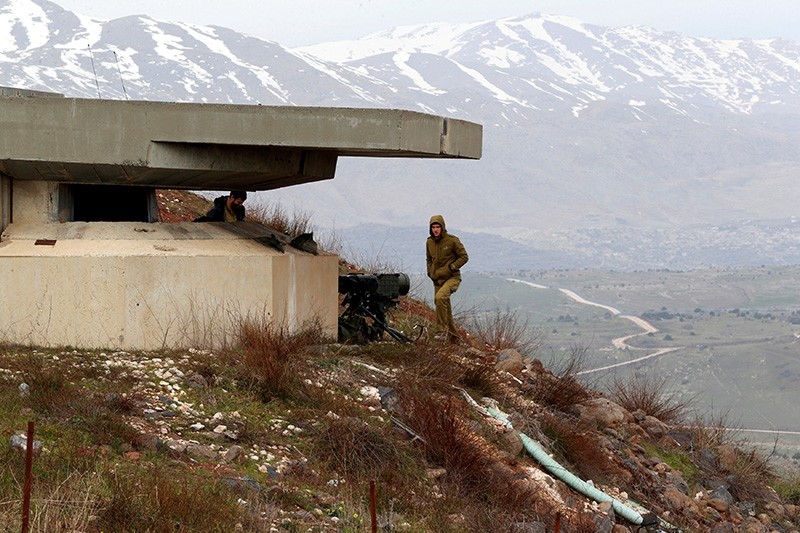 An Israeli soldier walks near a military post close to the Druze village of Majdal Shams in the Israeli-occupied Golan Heights, Israel February 10, 2018. (Reuters Photo)
by French Press Agency - AFP Apr 23, 2018 12:00 am

Israel fired at a Syrian artillery position on Monday after a mortar round fell close to the Israeli-occupied sector of the Golan Heights, the army said.

"A mortar shell fell adjacent to the security fence in the northern Golan Heights," the army said in an English-language statement, adding it was apparently a stray shot from the Syrian war.

"In response, the Israel Defense Forces (IDF) targeted one artillery piece in the area from which the fire originated, in the northern Syrian Golan Heights," it said.

An army spokeswoman declined to say what kind of fire Israel employed in its response.

"The IDF holds the Syrian regime accountable and won't tolerate any attempt to breach Israeli sovereignty or endanger civilians," the statement said.

Israel seized 1,200 square kilometers (460 square miles) of the Golan Heights from Syria in the Six-Day War of 1967 and annexed it in 1981. The move was never recognized by the international community.

Israel and Syria are still technically at war, though the armistice line on the Golan was largely quiet for decades until the civil war erupted in Syria in 2011.

The Israeli side of the Golan has since seen regular spillover fire, and Israel has carried out dozens of air strikes on Assad regime forces and their allies.

Israel says its strikes aim to stop advanced weapons deliveries to Hezbollah, a Lebanese armed group allied to the Bashar al-Assad's regime and with which the Jewish state fought a devastating war in 2006.