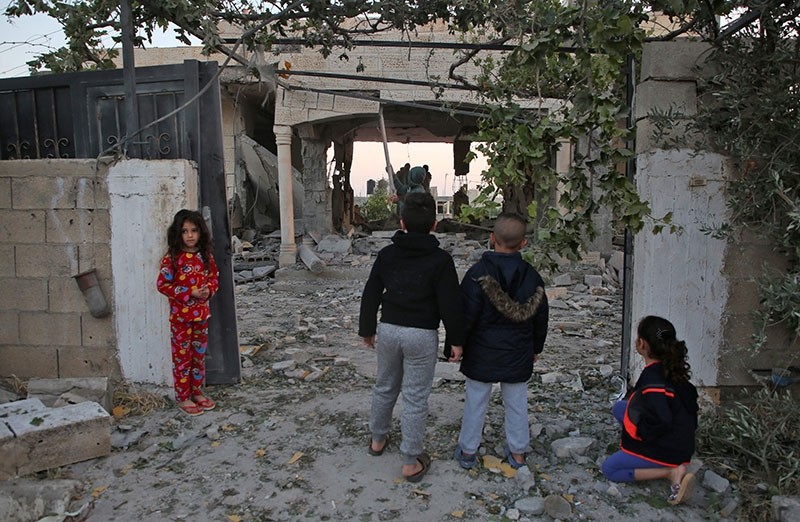 Palestinian children check the house of a man suspected of murdering an Israeli rabbi in January 2018, after it was demolished by Israeli forces on April 24, 2018, in the West Bank city of Jenin. (AFP Photo)
by Compiled from Wire Services Apr 24, 2018 12:00 am

Israeli forces on early Tuesday demolished the West Bank house of a Palestinian accused of involvement in the killing of a settler in January, Israeli and Palestinian sources said.

Ahmed Qunba's home in Jenin in the northern West Bank was destroyed in a controlled explosion, Palestinian security sources said.

They added that demonstrators clashed with Israeli forces at the scene.

The Israeli army said in a statement that Qunba was part of the cell that shot dead Rabbi Raziel Shevah near Nablus in the northern West Bank.

Shevah was a resident of the wildcat Havat Gilad settlement near Nablus.

Three suspects in his killing were shot dead by the Israeli army, but Qunba was arrested in mid-January and faces multiple charges.

During the home demolition, clashes broke out and a policewoman was shot in the leg, Israeli police said in a statement.

Israel periodically demolishes the houses of Palestinians who have perpetrated deadly attacks against Israelis, saying such a policy acts as a deterrent.

Critics denounce demolitions as a form of collective punishment that makes families homeless and can provoke further violence.

In 2005 Israel halted the policy, but in 2014, Israeli Prime Minister Benjamin Netanyahu announced that demolitions would resume after a wave of attacks.

More than 40 homes of Palestinians have been either demolished or shut down in the West Bank and East Jerusalem since October 2015, according to the Israeli human rights group B'Tselem.