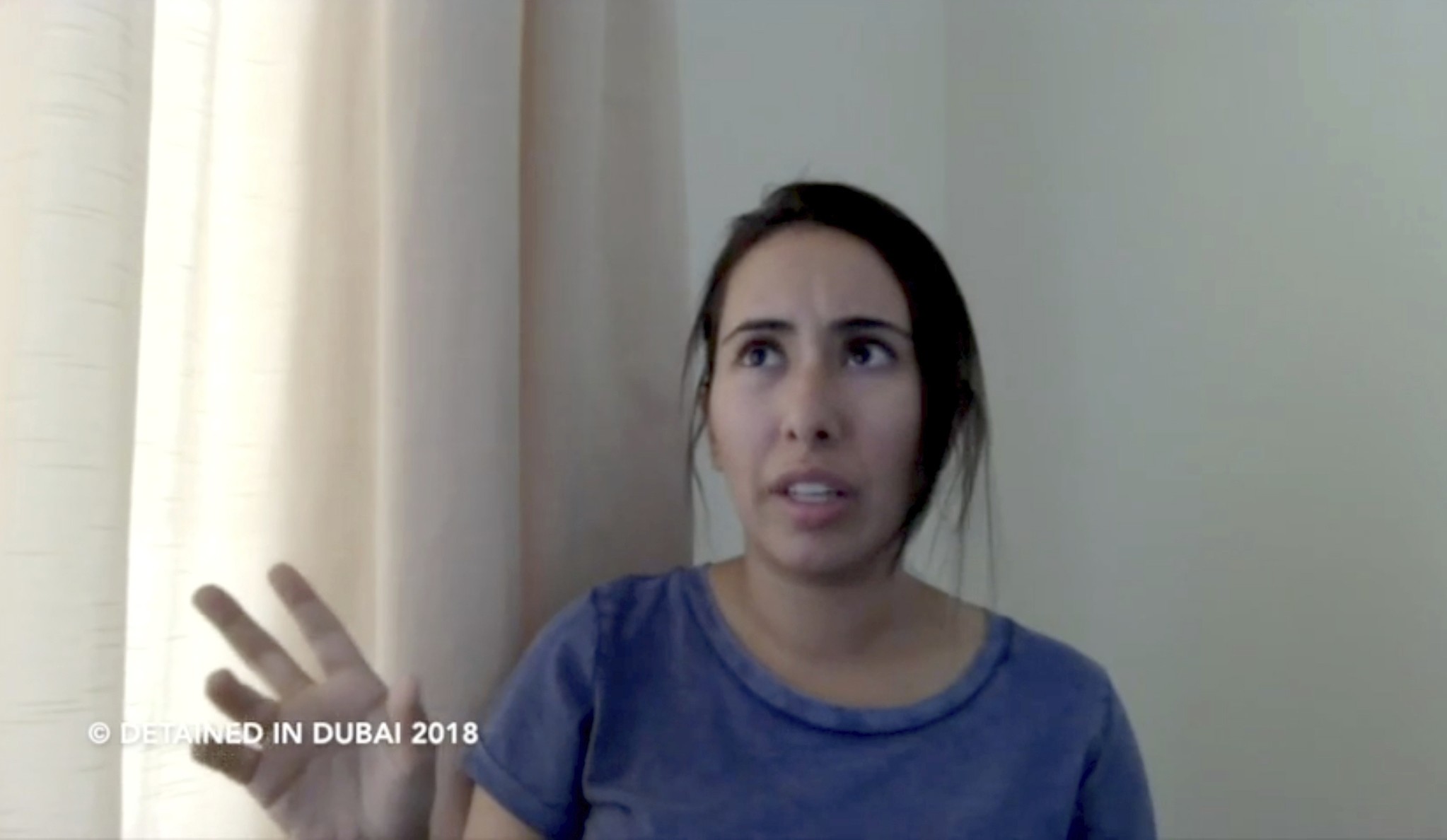 This undated image from video provided by Detained in Dubai shows Sheikha Latifa bint Mohammed Al Maktoum. (AP Photo)
by Compiled from Wire Services May 05, 2018 12:00 am

Human Rights Watch on Saturday asked Dubai's ruling sheikh to reveal the whereabouts of his daughter after a French ex-spy and others say she fled the emirate, only to be arrested off the coast of India.

A statement by the organization marks the latest twist in the cloak-and-dagger drama surrounding the disappearance of Sheikha Latifa bint Mohammed Al Maktoum, who friends believe has been returned to Dubai after fleeing in late February. She was detained March 4 in a seaborne raid, witnesses said.

"Failure to disclose the whereabouts and status of the princess could qualify as an enforced disappearance, given the evidence suggesting that she was last seen as UAE authorities were detaining her," Human Rights Watch said.

Dubai has declined to comment publicly about Sheikha Latifa since her disappearance in April. The government's Dubai Media Office offered no immediate comment Saturday.

In a March video, 32-year-old Sheikha Latifa announced she was fleeing the emirate because of mistreatment and restrictions imposed by her family.

She said she was the daughter of Dubai ruler Mohammed bin Rashed Al-Maktoum and an Algerian mother, Horriya Ahmed, and that she had tried to escape in previous years.

But the following month a source close to the Dubai government said the runaway princess had been returned to the emirate.

"What I can confirm is they took her and she was brought back," the anonymous source told AFP by phone on April 17.

In a statement on Saturday HRW cited a witness saying authorities in the United Arab Emirates had "intercepted Sheikha Latifa on March 4, 2018, as she tried to flee by sea to a third country, and returned her to the UAE".

"Sheikha Latifa, who told friends that she wished to flee restrictions imposed by her family, has not been seen or heard from for two months," it said.

"UAE authorities should immediately reveal the whereabouts of Sheikha Latifa, confirm her status, and allow her contact with the outside world," said Sarah Leah Whitson, HRW's Middle East director on Saturday.

"If she is detained she needs to be given the rights all detainees should have, including being taken before an independent judge."

Latifa's cause has been taken up by a U.K.-based group called Detained in Dubai.

The group said Latifa tried to flee Dubai by ship, but the vessel was intercepted on March 4 less than 80 kilometers off the coast of India.

It said a Finnish woman and friend of the princess was among foreigners on board.

The source close to the Dubai government said last month that the Finnish woman and two French men, one with dual U.S. citizenship, participated in the escape attempt and were wanted in Dubai on previous charges.