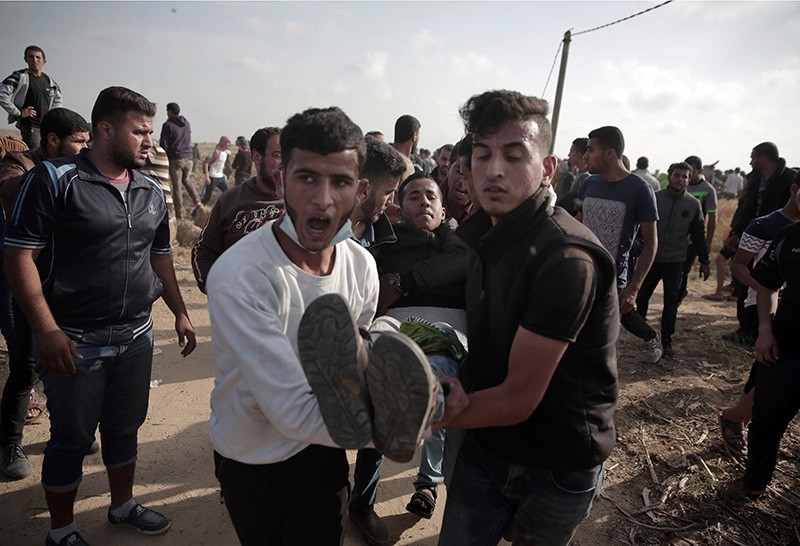 Israeli troops have shot and killed another three Palestinians at the Gaza border fence, the military said Sunday.

The Israeli military said the men were tried to breach the fence, and that an ax and wire cutter were found in their possession.

Soldiers fired tank shells and machine guns at the men, according to a Palestinian medic, Izzat Shatat. He said the men had been close to the border fence, but that he was not sure if they actually crossed into Israel.

The attempted breach came at a time of heightened tension on the Gaza-Israel border, including more than a month of weekly mass protests near the fence. Gaza's Hamas rulers have said the marches would continue until a decadeold blockade of the territory by Israel and Egypt is lifted. More protests are expected on Friday, as well as on May 14 and 15.

On May 14, the United States is to move its embassy in Israel from Tel Aviv to Jerusalem, whose Israeli-annexed eastern sector is sought for a Palestinian capital. The move is seen by Palestinians as a U.S. breach of long-standing promises to help negotiate a fair arrangement for the contested city.

On the following day, Palestinians mark the "nakba," or catastrophe, to commemorate the anniversary of their mass uprooting during the 1948 war over Israel's creation. Hundreds of thousands of Palestinians fled or were expelled from what is now Israel, and the border protests are also billed as a "Great March of Return."

Since late March, at least 49 Palestinian protesters have been killed and more than 1,700 wounded by Israeli army fire, not including the deaths reported Sunday.

Israel has come under international criticism, including from the United Nations and the European Union, for the use of lethal force against unarmed protesters. Rights groups say the army's open-fire orders, under which troops are permitted to shoot at those approaching the border fence, are unlawful.

Israel says that it is defending its sovereign border, which is in a "state of war." Israel says it only aims at "instigators," but video from some shootings contradicts that claim.

The military's statement Sunday was unclear about whether the Palestinians managed to get into Israel. The army spokesman's office, when asked to clarify, said the men did break through and were shot and killed at the fence area.

Earlier Sunday, thousands led by Hamas leader Ismail Haniyeh joined a Gaza funeral procession for six members of the Hamas military wing who were killed in an explosion a day earlier.

Hamas said the six, including two commanders, were killed "dismantling booby-trapped spying equipment planted by Israel during the past decade in Gaza."