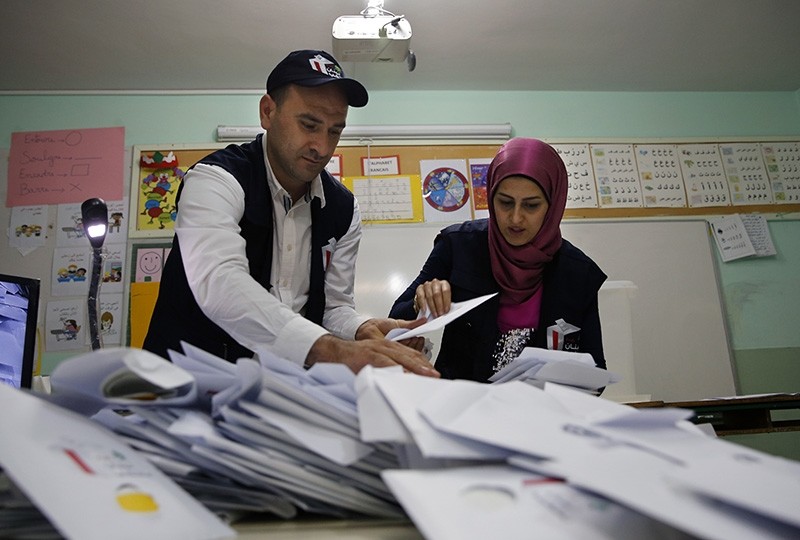 Election officials count ballots shortly after the polling stations closed in Beirut, Lebanon, Sunday, May 6, 2018. (AP Photo)
by Daily Sabah with Reuters May 07, 2018 12:00 am

The Iran-backed Shi'ite group Hezbollah and its political allies won more than half the seats in Lebanon's first parliamentary election in nine years, according to unofficial preliminary results cited by politicians and Lebanese media.

The result, if confirmed by the final count, would boost Hezbollah politically, with parties and individuals aligned with the heavily armed group securing a simple majority in parliament in Sunday's election.

Hezbollah's powerful position in Lebanon reflects Iran's regional ascendancy in territory stretching through Iraq and Syria to Beirut. It is an enemy of neighboring Israel and classified as a terrorist group by the United States.

An Israeli security cabinet minister responded to the early results Monday, saying Hezbollah's gains show that the Lebanese state is indistinguishable from the group and that Israel should not distinguish between them in any future war.

"The State of Israel will not differentiate between the sovereign State of Lebanon and Hezbollah, and will view Lebanon as responsible for any action from within its territory."

The unofficial tally indicated that Western-backed Prime Minister Saad al-Hariri would emerge as the Sunni Muslim leader with the biggest bloc in the 128-seat parliament, making him the frontrunner to form the next government even though he lost seats in his strongholds.

Lebanon's prime minister must be a Sunni according to the country's sectarian power-sharing system. The new government, like the outgoing one, is expected to include all the main parties. Talks over Cabinet posts are expected to take time.

Hariri on Monday acknowledged that his parliamentary bloc lost seats in this week's elections, blaming it on a new electoral law and a performance "that wasn't up to the standard."

In a televised statement Monday, Hariri said "my hand is extended to every Lebanese who participated in the elections to preserve stability and create jobs."

Hariri said his group won 21 seats in Sunday's vote, 11 fewer than what it had been holding since 2009.

He says he will continue to work closely with President Michel Aoun, who is allied with a rival bloc led by Hezbollah.

International donors want to see Beirut embark on serious economic reforms to reduce state debt levels before they will release billions pledged at a Paris conference in April.

The election was held under a complex new law that redrew constituency boundaries and changed the electoral system from winner-takes-all to a proportional one. The interior minister said official results would be declared on Monday morning.

The staunchly anti-Hezbollah Lebanese Forces, a Christian party, appears to have emerged as a big winner, nearly doubling its MPs to 15 from eight, according to the unofficial indications.

Hezbollah, along with affiliated groups and individuals, secured at least 67 seats, according to a Reuters calculation based on preliminary results for nearly all the seats obtained from politicians and campaigns and reported in Lebanese media.

Hezbollah's allies include the Shi'ite Amal Movement led by Parliament Speaker Nabih Berri, the Christian Free Patriotic Movement established by President Aoun and others that view its weapons as an asset to Lebanon.

Hezbollah-backed Sunnis did well in Beirut, Tripoli and Sidon, strongholds of Hariri's Future Movement, the preliminary results showed. The pro-Hezbollah al-Akhbar newspaper called it "the slap" for Hariri on its front page.

Hezbollah-backed winners include Jamil al-Sayyed, a retired Shi'ite general and former Lebanese intelligence chief who is a close friend of Syrian President Bashar Assad, according to the unofficial results.

Sayyed was one of the most powerful men in Lebanon in the 15 years of Syrian domination that followed the 1975-90 civil war.

At least five other figures who held office during the Syria-dominated era returned to parliament for the first time since Syrian forces withdrew from Lebanon after the assassination of Rafik al-Hariri, Saad's father, in 2005.

Faisal Karami, the son of the late pro-Syrian Prime Minister Omar Karami, won a seat for the first time.

Turnout was 49.2 percent, down from 54 percent the last time legislative elections were held nine years ago.

Hezbollah leader Sayyed Hassan Nasrallah was due to speak about the results later on Monday.

But Hezbollah lost ground in one of its strongholds, the Baalbek-Hermel constituency. Two of the 10 seats there were won by its opponents, one going to the Lebanese Forces and the other to Future.

An anti-Hezbollah alliance led by Hariri and backed by Saudi Arabia won a majority in parliament in 2009.

But that "March 14" alliance has disintegrated and Saudi Arabia has switched its attention and resources to confronting Iran in other parts of the region, notably Yemen.

Samir Geagea, the Lebanese Forces leader, said the results showed there was a "popular ground" that backs March 14 and would "give us strength and a push to fix the path much more than we were able to in the past years."

Geagea is Hezbollah's most prominent Lebanese Christian opponent. He led the Lebanese Forces militia in the last years of the civil war, during which he was an adversary of Aoun.

The question of Hezbollah's weapons has slipped down the political agenda in Lebanon in recent years. Hezbollah has grown militarily more powerful since 2012, deploying its fighters to Syria and Iraq where it has fought in support of Iranian allies.

Hariri, who led years of political conflict with the group, says it is an issue to be resolved at the regional level through dialogue.

The Lebanon vote is to be followed on May 12 by an Iraqi election that is also set to underline Iran's reach, with one of three pro-Tehran Shi'ite leaders set to become prime minister.

Enhanced Hezbollah sway over Lebanon will likely alarm the United States, which arms and trains the Lebanese army.

But the group and its allies are not on course to win the two-thirds majority that would allow them to pass big decisions alone such as changing the constitution.