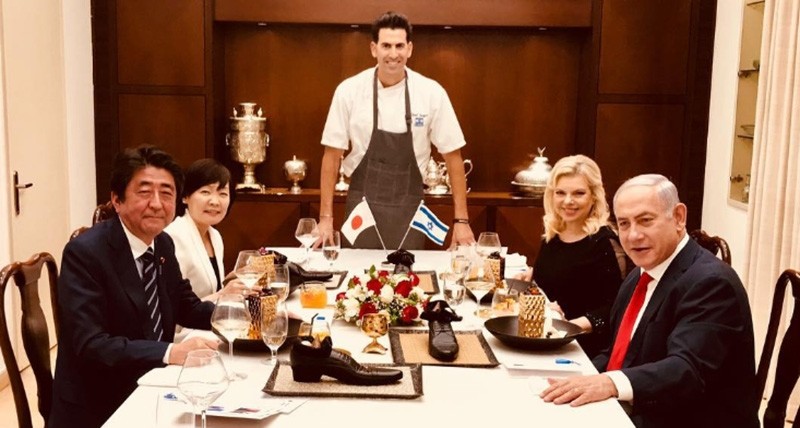 A dinner hosted by Israeli Prime Minister Benjamin Netanyahu for his Japanese counterpart Shinzo Abe ended on the wrong foot last week, when the chef served dessert in what appeared to be men's dress shoes.

Although the presentation would have been bizarre for any guest, to Abe and his wife Akie, the choice to put shoes on the table was particularly offensive. Japanese culture prizes cleanliness and shoes are "despised," as one diplomat explained.

"This was a stupid and insensitive decision," the senior Israeli diplomat who formerly served in Japan told the Yedioth Aharonot newspaper.

"There is nothing more despised in Japanese culture than shoes. Not only do they not enter their houses while wearing shoes, you will not find shoes in their offices either. Even the prime minister, ministers and members of parliament do not wear shoes to work ... It is equivalent to serving a Jewish guest chocolates in a dish shaped like a pig," the diplomat said.

The dessert, an arrangement of chocolate served in a metal shoe, was prepared by Israeli chef Segev Moshe, a prominent author, restaurateur and television personality.

"What precisely was this illustrious chef Segev thinking? If this is meant to be humor, we do not find it funny. I can tell you that we are offended for our prime minister," a Japanese diplomat told Yedioth Aharonot.

Moshe, who shared pictures of his chocolate creation on Instagram, received a storm of criticism from social media users.

One Instagram follower commented on his photo: "You've made your greatest fiasco ever. The nation will never forget this, Segev. I truly loved you. You should be ashamed."

Abe, however, appeared to take the insult in stride and reiterated Japan's support for the Iran nuclear deal after the meal. Israel was Abe's first stop on a diplomatic tour of the Middle East.