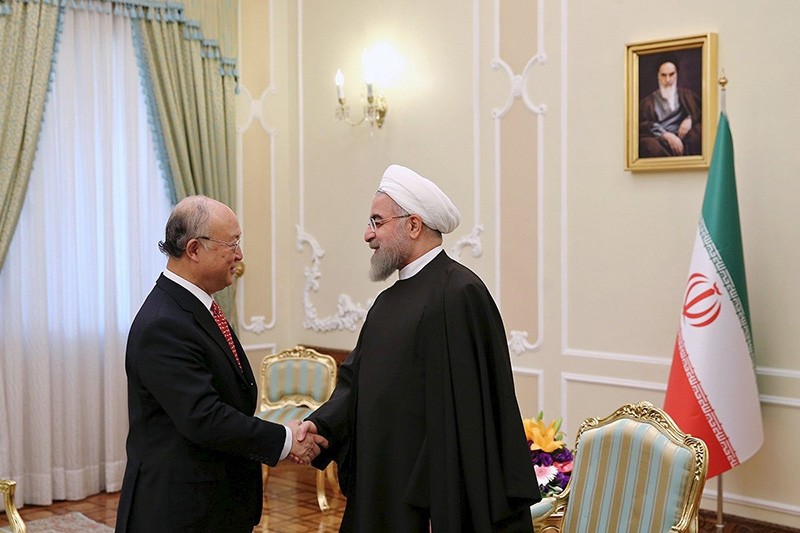 "As of today, the IAEA can confirm that the nuclear-related commitments are being implemented by Iran," IAEA Director General Yukiya Amano said in a statement.

According to the statement, Iran "is subject to the world's most robust nuclear verification regime under the Joint Comprehensive Plan of Action (JCPOA), which is a significant verification gain."

Trump announced Tuesday that the U.S. would pull out of the 2015 Joint Comprehensive Plan of Action (JCPOA), sparking an international outcry.

Amano reiterated that "Iran is subject to the world's most robust nuclear verification regime" and that the JCPOA was "a significant verification gain."

He previously said ditching the JCPOA would be "a great loss for nuclear verification and for multilateralism."

"The IAEA is closely following developments" related to the JCPOA, Amano added.

Despite U.S. criticism that the accord does not go far enough in monitoring Iran's activities, the IAEA says the JCPOA has given it much wider access to Iran's nuclear facilities, pointing to the fact that its inspectors now spend 3,000 man-days per year on the ground there.

The agency says it has attached some 2,000 tamper-proof seals to nuclear material and equipment, and that it has access to "hundreds of thousands of images captured daily by our sophisticated surveillance cameras," the number of which has almost doubled since 2013.

In his speech outlining the reasons for his move, Trump pointed to a presentation last week by Israeli Prime Minister Benjamin Netanyahu as "definitive proof" that Iran had previously lied about pursuing an exclusively peaceful nuclear program.

However, many analysts said that the presentation had merely re-hashed what was already known about Iran's previous activities.

In 2011 the IAEA had said it had found "credible" intelligence showing Iran's interest in acquiring nuclear weapons.

However, under the terms of the JCPOA, Iran had pledged to cooperate with the IAEA to answer its concerns over the "possible military dimensions" of its nuclear program.

In 2015, the IAEA closed its probe into the issue, concluding that "a range of activities relevant to the development" of a nuclear bomb took place in Iran until 2009 but that there were no credible indications they had continued after that date.