US embassy in Israel changes Twitter handle to Jerusalem 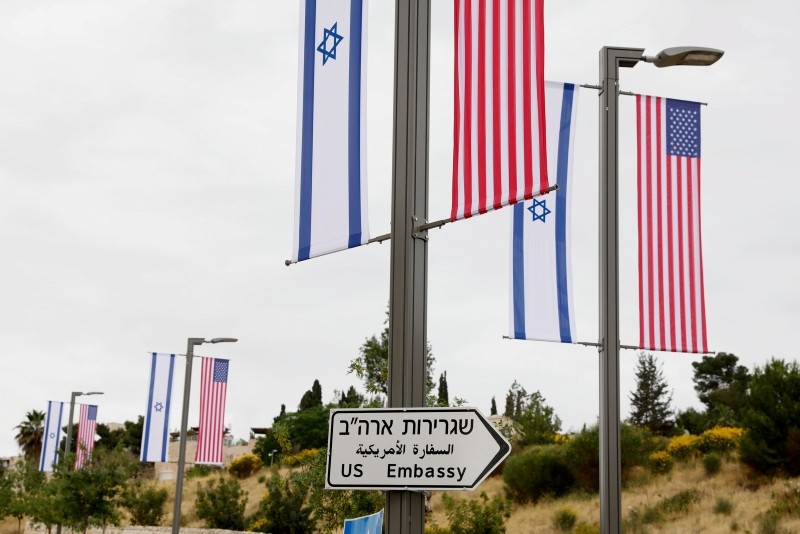 A new road sign and flags are placed at the road leading to the US consulate in the Jewish neighborhood of Arnona on the East-West Jerusalem line in Jerusalem, Israel, 08 May 2018. (EPA Photo)
by Compiled from Wire Services May 10, 2018 12:00 am

The U.S. Embassy in Israel has changed its Twitter handle to reflect the move from Tel Aviv to Jerusalem next week.

The embassy has yet to change its account's backdrop from the Tel Aviv coastline to Jerusalem, saying it is "still looking for a suitable header photo."

The Trump administration is fulfilling a campaign promise to move the embassy to Jerusalem, de facto recognition of the city as Israel's capital. The decision has enraged Palestinians, who want east Jerusalem, which Israel captured in the 1967 Mideast war, as capital of their future state.

Nearly all countries maintain embassies in Tel Aviv. The embassy transfer ceremony is slated for Monday.

So far around $400,000 has been spent on upgrades to the building, a US embassy spokeswoman said.

The foreign diplomatic corps has not been invited as the event is considered a bilateral one, the embassy spokeswoman said.

Jerusalem Mayor Nir Barkat on Tuesday said the city would name a small roundabout adjacent to the embassy as "Trump Square".

"Naming this square in honor of the president is our way of showing our love and respect for the president and the American people," he said in a statement.

The question of Jerusalem is one of the thorniest issues in the Israeli-Palestinian conflict.

"Those who attend the ceremony will be sending an ominous message, a message that they encourage flagrant violations of international law and (of) the inalienable rights of the Palestinian people," he said.