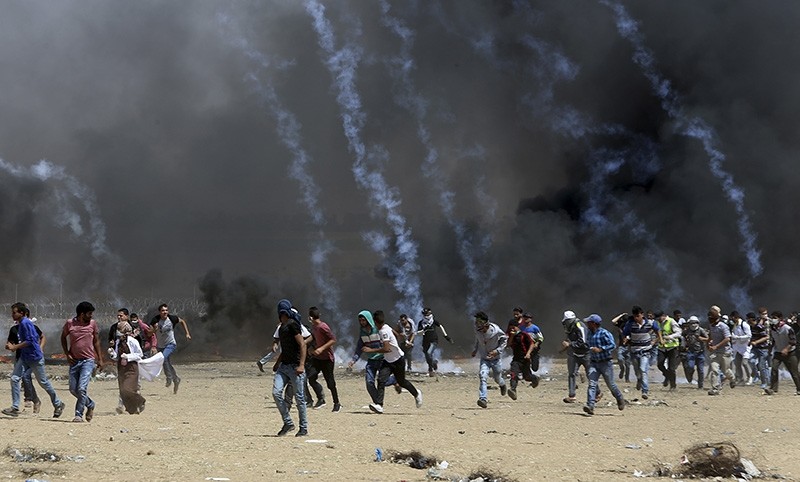 Palestinian protesters run for cover from teargas fired by Israeli troops during a protest at the Gaza Strip's border with Israel, Friday, May 11, 2018. (AP Photo)
by Daily Sabah with Agencies May 11, 2018 12:00 am

Israeli troops killed at least one and wounded 170 others, including two journalists and a paramedic in Gaza, as the weekly 'March of Return' clashes resumed on the border between the Gaza Strip and Israel.

One Palestinian has been killed and 170 others wounded by Israeli army fire amid protests on the Gaza-Israel border, Gaza medics said Friday.

For the seventh Friday in a row, thousands of Palestinians converged on the Gaza Strip's 45-kilometer eastern border with Israel as part of ongoing rallies against the decadeslong occupation.

The man who died was the 53rd Palestinian killed since protests began on March 30 calling for Palestinians to be able to return to the homes they fled in 1948, which are now inside Israel. Over 1,900 have been injured by Israeli fire.

Dozens more were injured by tear gas on Friday, including two journalists and a paramedic hit in the legs directly by tear gas canisters. Medics said four others were critically wounded, including a 16-year-old boy who was hit in the head by live ammunition, leaving him in critical condition.

Israeli news site Ynet said three Israelis were detained after they attempted to fly burning kites into Gaza but instead caused fires on Israeli agricultural lands.

Most of the deaths come as the Israeli army fires upon Palestinians who approach the border fence.

Israel has faced international criticism for its response to the mass marches. Rights groups have branded open-fire orders as unlawful, saying they effectively permit soldiers to use potentially lethal force against unarmed protesters.

In the face of growing criticism over Gaza border violence, the Israeli authorities said that human rights laws do not apply to ongoing Palestinian protests along the Gaza Strip's eastern border, Israeli daily Haaretz reported last Thursday. The Israeli government made the assertion in response to a petition lodged with Israel's High Court by a handful of human rights groups.

Named the Great March of Return, the protest action revives a longstanding demand for the right of return of Palestinian refugees to towns and villages that their families fled or were driven out of when the state of Israel was created in 1948. It has seen tent encampments spring up at several locations near the Israeli-imposed restricted zone along the 40-kilometer (25-mile) border fence and is scheduled to culminate on May 15, when Palestinians mark Nakba Day, or the Day of Catastrophe, commemorating their displacement 70 years ago.

More than 2 million Palestinians are packed into the narrow coastal enclave of Gaza. Israel withdrew its troops and settlers from Gaza in 2005. Israel and Egypt imposed a blockade in 2007 in response to a violent takeover of the territory by Hamas, which had won Palestinian parliament elections a year earlier. The blockade has gutted Gaza's economy, driving up unemployment and leaving two-thirds of young people without jobs.