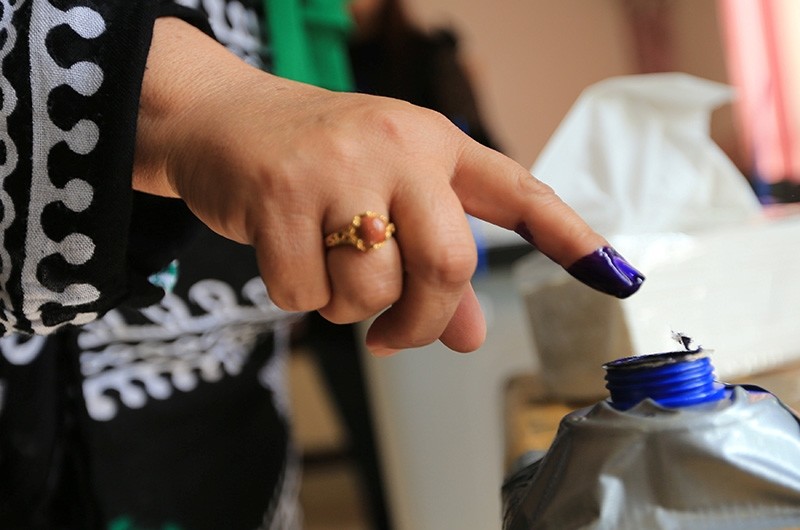 An Iraqi woman's finger is seen stained with ink at a polling station during the parliamentary election in Sulaimaniyah, Iraq May 12, 2018. (Reuters Photo)
by Compiled from Wire Services May 12, 2018 12:00 am

Polls opened across Iraq on Saturday in the first national election since the declaration of victory over the Daesh terror group. After hours of low voter turnout, Iraqi Prime Minister Haider al-Abadi partially lifted a security curfew to encourage more people to come to the polls.

The balloting has been seen as a referendum on al-Abadi's tenure and his pledge to be more inclusive of Iraq's Sunni minority. Entrenched corruption, the influence of Iran and the future of U.S. forces currently in Iraq are other issues that have dominated the run-up to the election.

The announcement from al-Abadi's office that a ban on civilian cars and buses in all provinces was partially lifted came after hours of relatively low turnout in Baghdad. The curfew had been in place since midnight the night before and many voters complained of having to walk more than 4 kilometers (2.5 miles) to reach polling stations.

Al-Abadi is seeking to retain his post but faces stiff competition from his predecessor, Nouri al-Maliki, and the Fatah alliance of candidates who have close ties to the powerful, mostly Shiite paramilitary forces. Fatah is headed by Hadi al-Amiri, a former minister of transport who became a senior commander of paramilitary fighters in the fight against the Daesh group. Many of the candidates on his list were also paramilitary commanders before they cut their official ties with the force in order to seek office.

Security was tightened across Iraq in the days before the election. Baghdad, Mosul and other major cities had imposed curfews on election day, and travel between provinces was restricted.

Al-Abadi ordered the reopening of the nation's airspace and resumption of air traffic on Saturday, state television reported.

In the country's northern province of Kirkuk, however, Daesh terrorists at least six people in attacks on a number of security checkpoints on Saturday, an Iraqi security officer told Anadolu Agency.

Last month, Daesh threatened to attack polling stations, saying that anyone who participates in the vote would be targeted as an infidel. At least four people were killed in an attack believed to have been mounted by Daesh militants in northern Iraq, a security official said Friday, a day before parliamentary elections, as reported by DPA.

Daesh militants no longer control significant pockets of Iraqi territory, but they do maintain a grip inside Syria along Iraq's border. In December, Iraq declared victory over Daesh, having recaptured all the territory captured by the extremists in 2014 and 2015. An electronic voting system is being used for the first time this year to try to reduce fraud and speed up the counting process. However, Turkmen and Arab residents of Iraq's Kirkuk province voiced concern about electronic voting machines that reportedly malfunctioned on Thursday when Iraqi security personnel cast ballots in parliamentary polls. Ershad Salihi, head of the Iraqi Turkmen Front, told Anadolu Agency on Friday that he had personally witnessed some of the problems and delays that had reportedly hindered yesterday's vote in Kirkuk.

The constitution sets a quota for female representation, stating that no less than one-fourth of parliament members must be women. Nearly 2,600 women are running for office this year.

Once results of the election are ratified by Iraq's Supreme Court, parliament is required to meet within 15 days. Its eldest member will chair the first session, which will elect a speaker. Parliament then must elect a president by a two-thirds majority vote within 30 days of its first meeting. In the past, forming a government has taken up to eight months. In 2005, allegations of vote-rigging delayed the ratification of election results for weeks.