US inaugurates controversial Jerusalem embassy amid bloodshed in Gaza 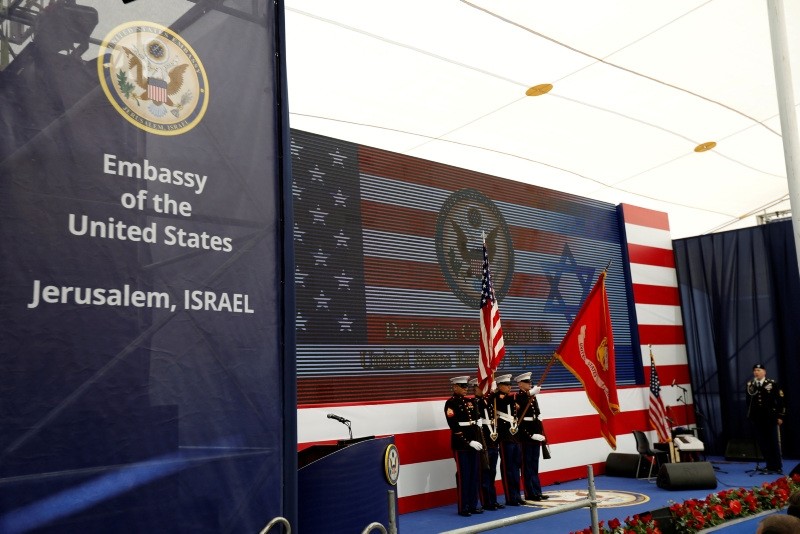 The United States officially opened its deeply controversial Jerusalem embassy on Monday in a ceremony that included a video address by President Donald Trump.

Trump told the ceremony that the United States remained committed to reaching a lasting Middle East peace, though the move of its embassy in Israel from Tel Aviv to Jerusalem has provoked outrage and condemnation from countries around the world.

A plaque and seal was unveiled at the ceremony officially opening the embassy.

EU foreign policy chief Federica Mogherini on Monday urged "utmost restraint" after at least 52 Palestinians were killed and 1,700 were injured by Israeli fire during protests against the opening of the U.S. embassy in Jerusalem.

"Dozens of Palestinians, including children, have been killed and hundreds injured from Israeli fire today, during ongoing mass protests near the Gaza fence. We expect all to act with utmost restraint to avoid further loss of life," Mogherini said in a statement..

Tens of thousands had gathered near the border in protest while smaller numbers of stone-throwing Palestinians approached the fence and sought to break through, with Israeli snipers positioned on the other side.

The demonstrators are demanding an end to Israel's over the decadelong blockade of the Gaza Strip, and a return to lands Palestinians fled 70 years ago during the war that marked Israel's creation.

U.S. ambassador to Israel David Friedman also spoke at the ceremony in Jerusalem and Trump was given a standing ovation when he mentioned him.

Some 800 guests were attending the ceremony.

Israel considers the entire city its capital, while the Palestinians see east Jerusalem as the capital of their future state.

Around 2 million Palestinians live in the Gaza Strip, the majority of whom are Palestinian refugees who fled lands in present day Israel in 1948 or their descendants.

The strip faces a dire humanitarian situation, exacerbated by a blockade administered by Israel and Egypt and three Hamas-Israel wars over the past decade.