UNSC convenes over the situation in Gaza, Israeli violence against Palestinians 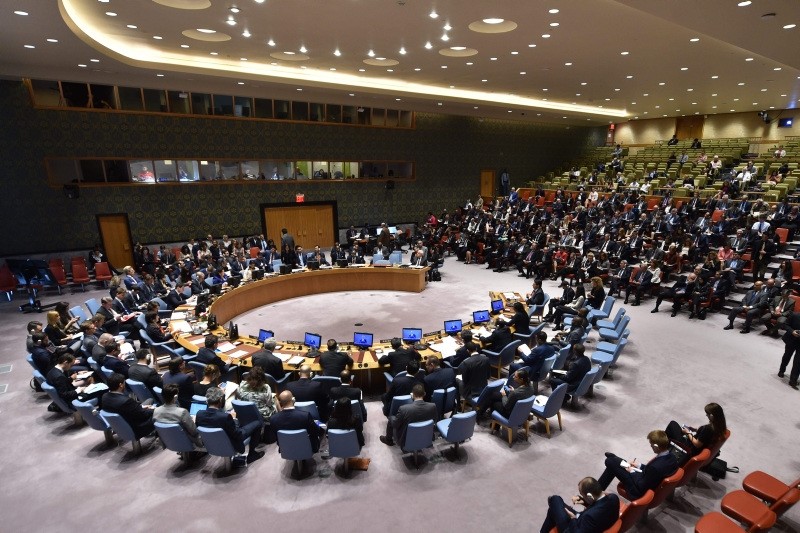 The U.N. Security Council met Tuesday to discuss violence along the border between Israel and the Gaza Strip, beginning with a moment of silence for the more than60 Palestinians killed by Israeli forces in the bloodiest day there since a 2014 war.

Poland's ambassador, Joanna Wronecka, called for the gesture of remembrance in her role as current council president.

Kuwait called for the session after 61 Palestinians were killed and over 2,400 wounded by Israeli gunfire amid mass protests Monday. Israel said its troops were defending its border and accused Hamas militants of trying to attack under the cover of the protest.

The U.N. Security Council stood in a moment of silence early Tuesday for Palestinians killed in Gaza by Israeli forces the day before.

The U.N. Middle East peace envoy Nikolay Mladenov said there was "no justification" for the violence on the Gaza Strip on Monday - the bloodiest day of fighting on the Gaza Strip since 2014 - as he briefed the 15-member council in an emergency meeting.

Mladenov called Monday a "day of tragedy" and asked the international community to refrain from unilateral measures that steer Israel and Palestine away from the peace process. Nations should put their efforts toward "preventing an explosion that can drag the whole region into deadly confrontation," he said.

The U.S. ambassador to the U.N. was quick to defend Israel, saying the country had acted with restraint in the face of provocation from Hamas.

"No country in this chamber would act with more restraint than Israel has," Nikki Haley told the Security Council. "In fact the records of several countries here today suggest they would be much less restrained," she said.

It was not immediately clear what might come out of the council session. No joint statement or action followed a similar meeting after protests in March, and two U.N. diplomats said members couldn't reach unanimous agreement Monday on issuing a proposed statement circulated by Kuwait. The diplomats insisted on speaking anonymously because the discussions were supposed to be private.

The draft statement, obtained by The Associated Press, would have expressed "outrage and sorrow" at the killings, sought an "independent and transparent investigation," and called on all sides to exercise restraint.

It also would have demanded that all countries comply with a decades-old Security Council resolution that called on them not to have embassies in contested Jerusalem. The United States inaugurated its embassy there Monday.

The U.S. vetoed a Security Council resolution in December that would have required President Donald Trump to rescind his declaration of Jerusalem as Israel's capital.

Earlier Monday, the Palestinian U.N. envoy urged the United Nations' most powerful body to condemn the killings. Israel, meanwhile, called on the council to condemn Hamas, the group that rules the coastal strip and led the protests.

Israel isn't a council member, nor are the Palestinians.

Monday's violence came as the U.S. and Israel celebrated the embassy opening, the first official recognition of Jerusalem as Israel's capital after 70 years. The move infuriated Palestinians, who seek eastern Jerusalem as a future capital of their own.

"A tragic day for the Palestinians," retorted their U.N. ambassador, Riyad Mansour. In remarks to reporters and a letter to the Security Council president, he called on the council to "make its voice heard to stop the carnage," bring those responsible to justice and protect civilians.

Israeli Ambassador Danny Danon said the council needed to speak out against Hamas.

"Every casualty on the border is a victim of Hamas' war crimes, every death is a result of Hamas' terror activity, and these casualties are solely Hamas' responsibility," Danon said in a statement.

The demonstration Monday culminated a weeks-long Palestinian campaign against a blockade imposed by Israel and Egypt after Hamas seized control of Gaza in 2007. Protesters set tires ablaze, sending thick plumes of black smoke into the air, and hurled Molotov cocktails and stones toward Israeli soldiers across the border.

The Israeli military said Hamas tried to carry out bombing and shooting attacks under the cover of the protests and released video of protesters ripping away parts of the barbed-wire border fence.

U.N. Secretary-General Antonio Guterres issued a tweet Tuesday saying, "I am profoundly alarmed and concerned by the sharp escalation of violence and the number of Palestinians killed and injured in the Gaza protests. It is imperative that everyone shows the utmost restraint to avoid further loss of life."