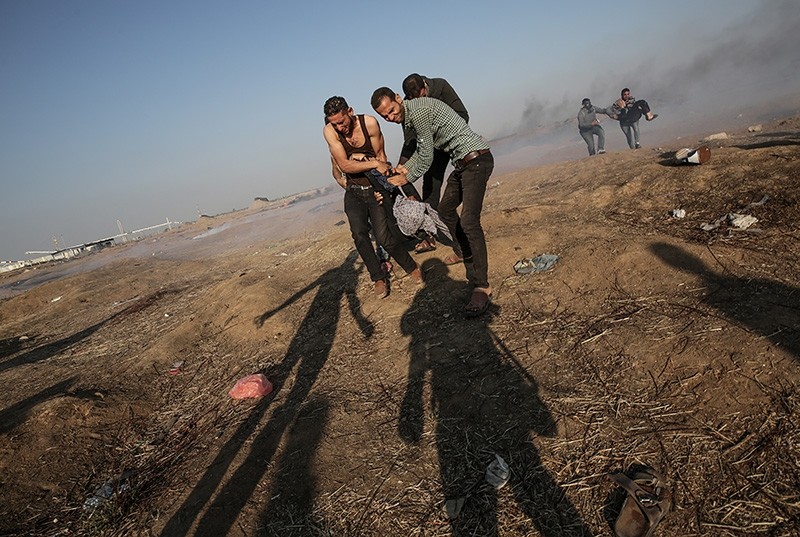 Palestinians protesters carry a wounded female protester during clashes near the border with Israel in the east of Gaza Strip, May 15, 2018. (EPA Photo)
by Daily Sabah May 16, 2018 12:00 am

Israel's brutal use of force against Palestinian civilians has shocked the world in recent weeks, leaving at least 114 civilians dead. However, it's hardly the first, or bloodiest, massacre Israel has carried out in recent memory.

Here's a look at Israel's deadliest atrocities against Palestinians in recent years.

The seven-week ground and air operation by the Israeli Defense Forces IDF in Gaza Strip left the world stunned, killing 1,394 Palestinian civilians and wounding over 10,000. Over 3,300 children were injured, including 1,000 who were left permanently disabled. The U.N. estimates 373,000 children needed psychosocial support in the wake of the violence. In addition to airstrikes targeting hospitals and schools, more than 7,000 homes were razed and tens of thousands of families displaced.

In a mere eight days in November 2012, IDF killed 87 Palestinian civilians, striking 1,500 sites in the Gaza Strip and displacing many families. While the U.S. and other Western countries claimed Israel's offensive was within its rights, Turkey, Iran, China and Russia stood up against the killings and condemned Israel.

Over a period of three weeks, IDF attacked police stations and political administrations in Gaza Strip's densely populated cities of Gaza, Khan Yunis and Rafah. The ruthless strikes killed 759 civilians and were strongly condemned by the international community for lacking any discrimination between military and civilian targets.

The U.N. responded to the operation by accusing Israel of war crimes in a report by a special mission, and later demanding Israel repair damages. However, a follow-up assessment in 2012 by the U.N. Human Rights Council concluded 75 percent of homes destroyed in the attacks had not been repaired.

In summer 2006, Israel clamped down on Palestinian resistance, carrying out an aggressive operation that resulted in the deaths of 117 Palestinian civilians. IDF artillery fired on a busy Gaza beach in June, killing eight Palestinians in one family. The military tried to cover-up the attack by blaming it on a "Palestinian-planted mine," despite a Human Rights Watch investigation providing evidence otherwise.

In late March 2002 amid the Second Intifada, Israel carried out its largest military operation in the occupied West Bank since the 1967 Six-Day War. The IDF invaded Ramallah, Tulkarm, Qalqilya, Bethlehem, Jenin and Nablus in just over a month, killing 497 Palestinians, wounding 1,447 and detaining 7,000 others.

A U.N. report on the operation said much of the fighting "occurred in areas heavily populated by civilians and in many cases heavy weaponry was used." Despite widespread suffering, Israel prohibited entry of medical and humanitarian personnel, as well as journalists and human rights monitors during the month of April.

Thirty-six years after this slaughter, it's still fresh in the minds of Palestinians and their supporters. The massacre took place at the Sabra and Shatila refugee camp in West Beirut, under the supervision of the IDF. In a day and a half, the Phalanges militia, allied with IDF, brutally executed at least 2,000 civilians and raped hundreds of others, mostly Palestinians and Lebanese Shiites. The attack was carried out in retaliation after Palestinians were falsely accused of assassinating newly-elected Lebanese president Bachir Gemayel.