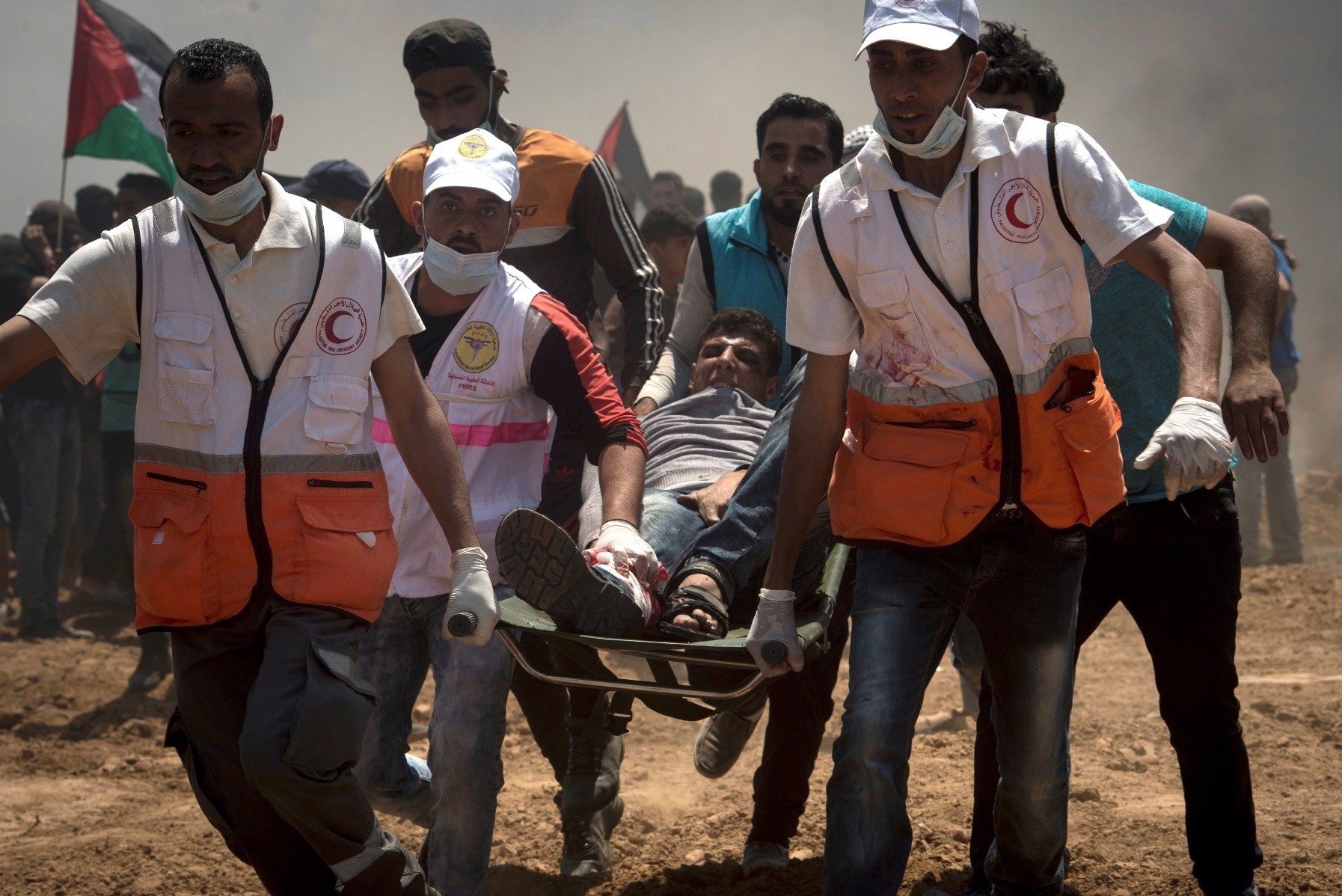 Medics carry a Palestinian demonstrator on a stretcher at the Gaza-Israeli border, May 14.
by Compiled from Wire Services May 17, 2018 12:00 am

After the deadliest day of Gaza violence in years, the humanitarian situation in the occupied Palestinian territories deteriorated further as hospitals struggle to cope with high casualty tolls, which keep rising

Patients with gunshot wounds filled wards and hallways in Gaza's under-equipped and overwhelmed hospitals, with dozens still waiting in line for surgery a day after the deadliest day of violence since the 2014 Gaza war.

On Monday, Israeli forces shot and killed 59 Palestinians and wounded more than 1,300, making it the deadliest single day in Gaza since a 2014 cross-border war between Israel and Hamas. Two more Palestinians were shot dead in scattered border protests Tuesday, bringing the total since late March to more than 100, the Health Ministry said. Hospitals in the Gaza Strip have been overstretched by the more than 2,700 people injured along Israel's border fence, including 1,300 by gunfire, U.N. agencies said in Geneva. World Health Organization (WHO) spokesman Tarik Jasarevic said Israel's long-lasting blockade of the Gaza Strip has created chronic shortages for Palestinian health facilities.

Over 1,000 children have been injured by Israeli forces in the besieged Gaza Strip during demonstrations since March 30, according to the U.N. Children's Fund (UNICEF) yesterday. The U.N. body pointed out that some injuries had been severe and potentially life altering, including amputations.

"Recent violence has exacerbated the already weak health system in the Gaza Strip, which is crumbling because of the severe power cuts and shortages of fuel, medicine and equipment," UNICEF said in a statement. "Medical facilities are buckling under the strain of additional casualties," he said.

UNICEF and its partners yesterday delivered two truckloads of urgent medical supplies to the Gaza Strip for an estimated 70,000 people. The drugs and medical equipment include antibiotics, saline solutions and syringes for the treatment of injuries, it said.

The high casualty toll triggered a diplomatic backlash against Israel and new charges of excessive use of force against unarmed protesters. The U.N. Security Council began its session Tuesday with a moment of silence for the dead, and the U.N.'s special Mideast envoy said there was "no justification for the killing."

Monday's border confrontation was the culmination of a weeks-long protest campaign to break a border blockade that Israel and Egypt imposed after Hamas took over Gaza by force in 2007. The protests were led by Hamas, but fueled by the growing despair among Gaza's 2 million people who face worsening poverty, unemployment, 22-hour-a-day power cuts and sweeping bans on travel and trade. The protests were also driven by anger over the relocation Monday of the U.S. Embassy in Israel from Tel Aviv to contested Jerusalem. Palestinians seek Israeli-annexed East Jerusalem as a future capital. Even before the latest round of bloodshed, Gaza's health system of 13 public hospitals and 14 clinics run by NGOs had buckled under persistent blockade-linked shortages of medicines and surgical supplies. Compiled from wires