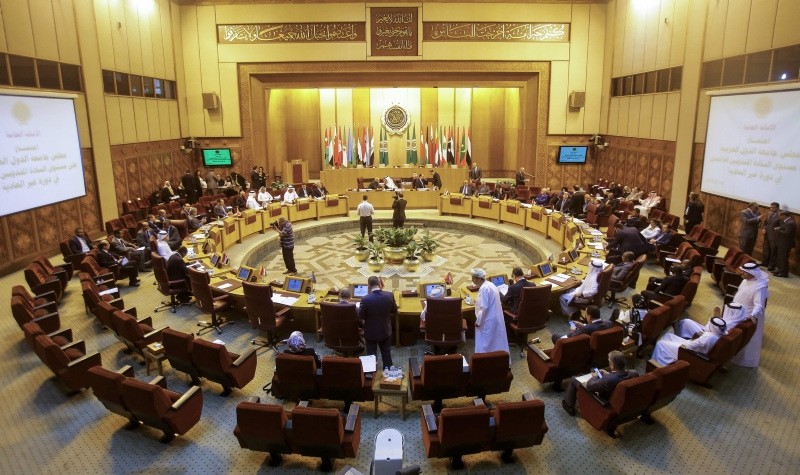 A picture taken on May 16, 2018 shows a general view of the meeting of the permanent delegates of Arab League during extra-ordinary emergency session held at the League's headquarters in the Egyptian capital Cairo. (AFP Photo)
by Daily Sabah with Reuters May 17, 2018 12:00 am

Palestinian Foreign Minister Riyad al-Maliki suggested on Thursday that Arab countries should recall their ambassadors to the United States in response to Washington moving its Israel embassy to Jerusalem.

"There is no harm in Arab states collectively recalling their ambassadors in Washington to their capitals for consultations," Maliki said in live televised remarks at the Arab League in Cairo.

The United States opened its new Israel embassy in Jerusalem on Monday in a controversial move to the holy city from Tel Aviv that has brought wide condemnation. Israeli soldiers killed more than 60 Palestinians who protested in the Gaza Strip while the embassy opened.

Turkey was the first country to withdraw its ambassador to Washington after the Israeli bloodshed, which came on the same day the embassy move took place. Turkish envoy Serdar Kılıç arrived back in Ankara on Wednesday afternoon.

Maliki also said members of the Arab League, whose foreign ministers gathered in Cairo on Thursday for an extraordinary meeting to discuss the issue, should summon U.S. ambassadors "to remind them of the Arab rejection of the U.S. embassy's transfer to Jerusalem."

He said Arab states had agreed at previous summit meetings that they would cut ties with any country that moves its embassy to Jerusalem.

Lebanon's delegation said its foreign ministry had sent a letter to the International Criminal Court demanding it "undertake measures" to hold to account those responsible for the killings of Palestinians. It did not specify what those measures should be.

It was unclear what the response would be to Maliki's suggestion. Several Arab countries such as Egypt and Saudi Arabia enjoy strong ties with the administration of President Donald Trump.