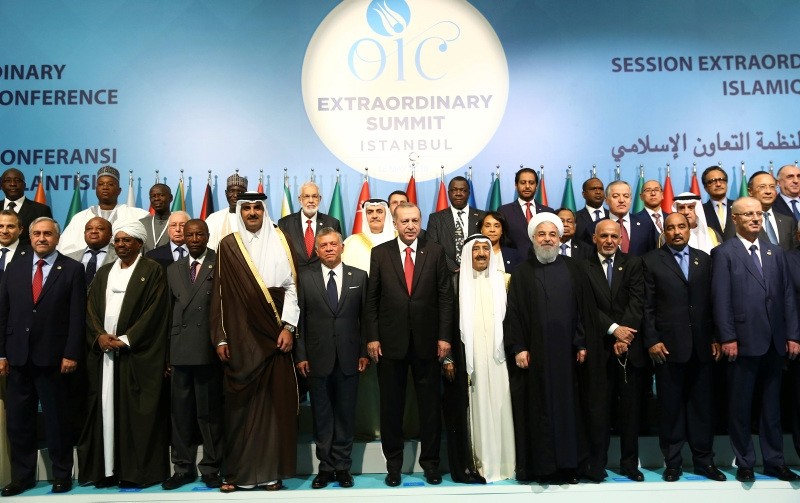 Muslim countries' leaders and observers gather for a group photo before an extraordinary summit of the Organization of Islamic Cooperation (OIC), in Istanbul, Turkey, Friday, May 18, 2018. (Turkish Presidential Press)
by daily sabah
May 18, 2018 12:00 am

Member states of the Organization of Islamic Cooperation (OIC) on Friday condemned "savage crimes" committed by Israeli against Palestinians in the Gaza Strip and called the international community to provide protection for the Palestinian people.

According to the final communique, the leaders from Islamic countries called on the UN Security Council, the UN General Assembly, the UN Secretary General, UN Human Rights Council, the special rapporteurs and the UN High Commissioner for Human Rights to take "necessary actions to form an international investigation committee into the recent atrocities in the Gaza Strip."

The summit also reaffirmed the importance of the Palestinian cause and the status of Jerusalem to the Muslim world and once again rejected the U.S. decision to recognize Jerusalem as the capital of Israel.

The declaration also declared "determination to take the appropriate political, economic and other measures" against countries which follow the U.S.' suit in recognizing the holy city as the Israeli capital and move their embassies from Tel Aviv to Jerusalem.

Speaking at the beginning of the summit, President Recep Tayyip Erdoğan urged the Muslim world to unite against Israeli attacks on Palestinian at the OIC Summit on Jerusalem in Istanbul.

In his opening address during the ongoing extraordinary summit of the Organization of Islamic Cooperation (OIC), Erdoğan said: "I will say openly and clearly that what Israel is doing is banditry, brutality and state terror."

"There is no difference between the atrocity faced by the Jewish people in Europe 75 years ago and the brutality that our Gaza brothers are subjected to," he said.

"Muslims will not take even one step back from their claims in the East Jerusalem."

Monday's protests in Gaza coincided with Israel's 70th anniversary - an event Palestinians refer to as Nakba or the "Catastrophe" - and the relocation of the U.S. Embassy to Israel from Tel Aviv to Jerusalem.

Since the mass Gaza rallies began on March 30, more than 100 Palestinian protesters have been martyred by Israeli army gunfire.

Last week, the Israeli government claimed that the ongoing protests constitute a "state of war" in which international humanitarian law does not apply.

Meanwhile, Erdoğan spoke with U.N. Secretary-General Antonio Guterres in a phone call and discussed the Palestinian and Syrian issues. He highlighted that it is crucial for the international community to show a stronger reaction against Israeli aggression, while he noted that the establishment of a commission to investigate what happened in Gaza was a positive development.