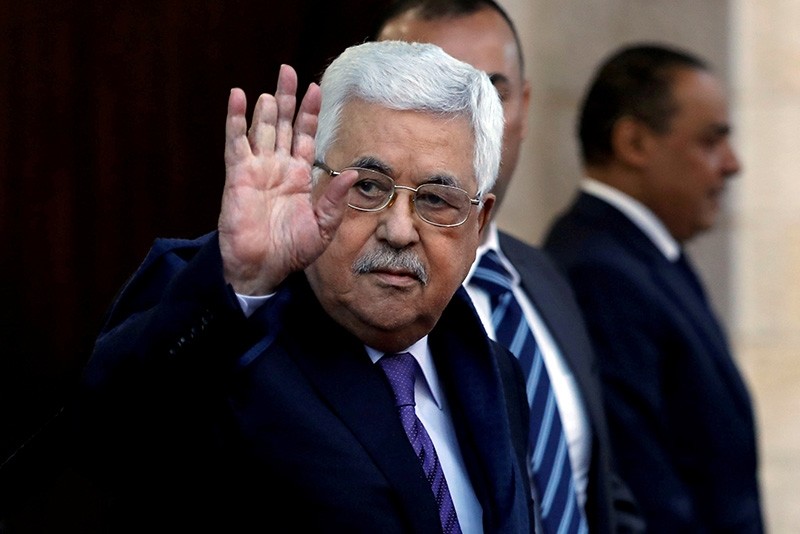 Palestinian President Mahmoud Abbas waves in Ramallah, in the occupied West Bank May 1, 2018. (Reuters Photo)
by Daily Sabah with Agencies
May 20, 2018 12:00 am

Palestinian President Mahmoud Abbas was hospitalized in the West Bank city of Ramallah on Sunday for medical tests, according to a medical source.

It was the third time Abbas, 82, had been hospitalized in a week. He underwent minor ear surgery on Tuesday and was hospitalized again briefly overnight on Saturday, the official Palestinian news agency Wafa said.

A Palestinian official in Ramallah said Abbas went back into hospital again later on Sunday because his temperature was high "so doctors advised that he go back into the hospital."

Two statements were issued by Wafa on Sunday. The first, a half-hour after midnight, said Abbas had gone into hospital "for a checkup to review the surgery that he had in his middle ear a few days ago at al-Istishari hospital in Ramallah. At the end of the tests, the results turned out to be excellent," the statement said, and Abbas left the hospital.

A second statement carried by Wafa on Sunday afternoon reported the medical manager of al-Istishari hospital, Dr. Saed Sarahneh, said the results of the medical tests were "good" and that his medical condition was "reassuring."

A Palestinian official, who spoke on condition of anonymity, said the high temperature may have resulted from a failure of an ear inflammation to heal completely.

Abbas' health condition prevented him from attending the extraordinary Organisation of Islamic Cooperation (OIC) summit in Turkey on Friday, which was held to discuss the opening of the U.S. Embassy in Jerusalem.

In February, Abbas was hospitalized in the United States for medical checks during a trip to address the U.N. Security Council in New York.

Abbas became Palestinian president after the death in 2004 of Yasser Arafat. He pursued U.S.-led peace talks with Israel but the negotiations broke down in 2014.

He is also chairman of the executive committee of the umbrella Palestine Liberation Organization, a position to which he was re-elected unopposed on May 4.