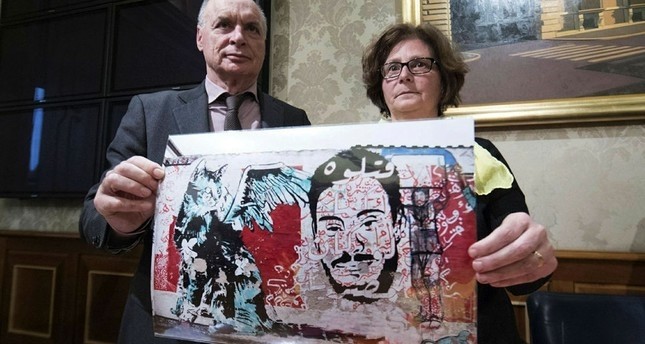 The parents of Giulio Regeni, an Italian graduate student tortured to death in Egypt, shows a pictures of a murales depicting their son. (ANSA via AP)
by Daily Sabah with Agencies Jun 04, 2018 12:00 am

A team of Italian experts who went to Cairo on Wednesday to take part in the retrieval of CCTV recordings as part of the investigation into the 2016 killing of Italian student Giulio Regeni were left disappointed after discovering the surveillance video given by the Egyptian authorities was heavily damaged.

However, the most of the recordings, which came two years of the incident, had been erased, overwritten by later surveillance recordings, an Italian official told The New York Times, speaking on the condition of anonymity.

Italian specialists will use facial recognition software to scan video fragments from hundreds of cameras for an image of Regeni but their chances are slim as the officials say only 5 percent of the images from the night the Italian student disappeared remain in the heavily edited video.

Egyptian police initially suggested Regeni died in a traffic accident, but later said he was killed by an anti-foreigner criminal gang whose members were all killed in a shootout with police.

That account was met with suspicion in Italy, where politicians and the media have suggested Regeni was slain by elements of Egypt's security services.

An Italian autopsy showed that Regeni's body was covered with cuts and his bones were broken, indicating he had been hit with "fists, batons and hammers."

A letter "X" was carved on his forehead and hand, according to the report cited by Italian media.

Regeni was in Cairo researching Egyptian street vendor trade unions, a sensitive topic, and had written articles critical of the government under a pen name.

Egypt's pro-government media has long suggested Regeni was involved in fomenting unrest, without providing any evidence. Regeni's disappearance coincides with the fifth anniversary of the Jan. 25 uprising, when police were out in force. Egypt has denied its security forces were involved in the killing, but Italy severed diplomatic ties over Cairo's alleged lack of cooperation in the investigation.