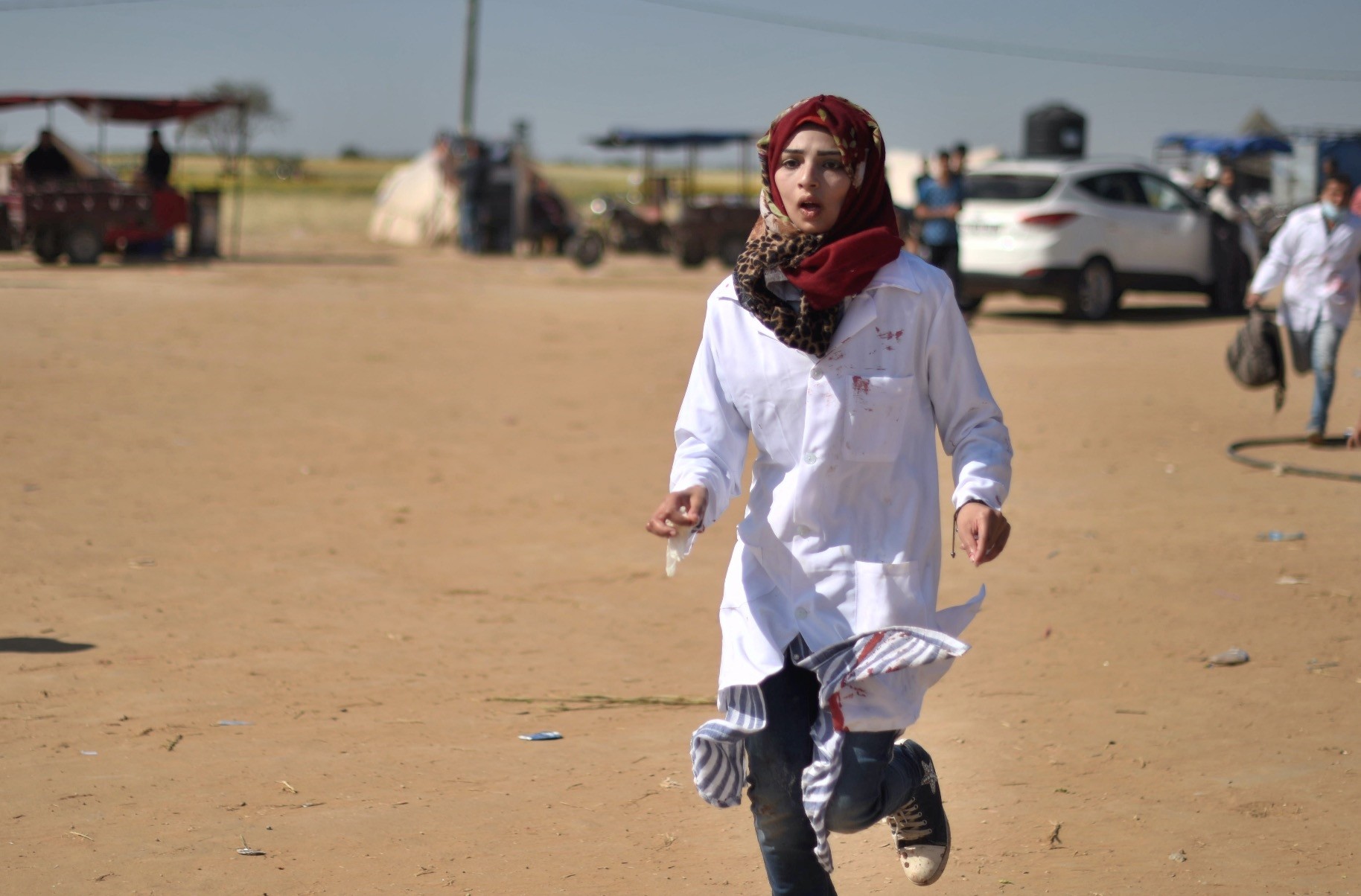 A 21-year old Palestinian medic, Razan al-Najjar was shot dead by Israeli forces as she ran to treat injured protesters at the border fence.
by Yusuf Selman İnanç Jun 04, 2018 12:00 am

Razan al-Najjar, a young medic, was rushing to save the lives of wounded Gaza protesters when she was killed by an Israeli bullet last Friday

She was an angel. People around Razan al-Najjar, the young medic who was killed by Israel Friday, used to call her the angel of mercy as she rushed through the crowd of Gaza border protesters to help the wounded. She was only 21. Having been born in Gaza's Khouza, an area badly hit in Israeli attacks in 2014, al-Najjar was always determined to help people with a smile on her face. In some of her last words, al-Najjar told the international media that her duty was to "give first aid to the wounded until they reach the hospital." She worked more than 13 hours a day, treating at least 70 people daily during the latest series of protests. She often did not return home, but kept on working without dinner or sleep.

She must have felt honored when her white uniform got red with blood. She was a defender of women's rights. She wanted to demonstrate that women could be at the forefront and assume difficult responsibilities. In one of her interviews she said that her society had to accept women, otherwise, the women would force them to do so. She was in an area where the recent Gaza border protests have been taking place since day one, risking her life more than her male colleagues. She had seen several corpses in the field. Many had been killed before her eyes. She had witnessed the last moments of many people but this time she became the victim. She was not able to aid herself as a bullet hit her chest.

She was again wearing her white uniform, indicating that she was a medical worker. Her hands were up while she was rushing to reach an injured protester, lying on the ground. Yet, she could not do it. She was the 119th Palestinian killed in the recent protests. It was Friday and only her death was reported.Her slain body was wrapped in the Palestinian flag. Thousands of people carried her dead body in Gaza, chanting slogans against Israel and the U.S. People around the world have reacted angrily to her killing on social media. Her death did not end the protests, instead whetted the Palestinians' anger.

She was eldest of five siblings. Her family was very proud of her for being someone who refused to share the same fate with other women of her age. She had become a medic, had a career, had a future and had been loved by everyone, almost unexceptionally. Her family is distraught with grief.

Her boyfriend, Izzat Shatat, works as an ambulance driver. They worked together and the couple was planning to announce their engagement at the end of Ramadan. Izzat was worried about her and asked not to get close to the fence on Friday. Yet, she had refused and tried to approach the wounded. "She helped all people. She has never refused to help. She was the first to run toward anybody who got shot," he said.

It was not the first time that Israel had targeted a medic. During its last attack on Gaza in 2014, several hospitals were bombed, killing a number of doctors and health professionals. According to certain conventions, it is said that Israel is carrying out war crimes. However, given that the U.S. backs Israel in the United Nations Security Council and vetoes any demands for investigation and Israel seems to have become very reckless. There has been no decision for sentencing Israel as yet.