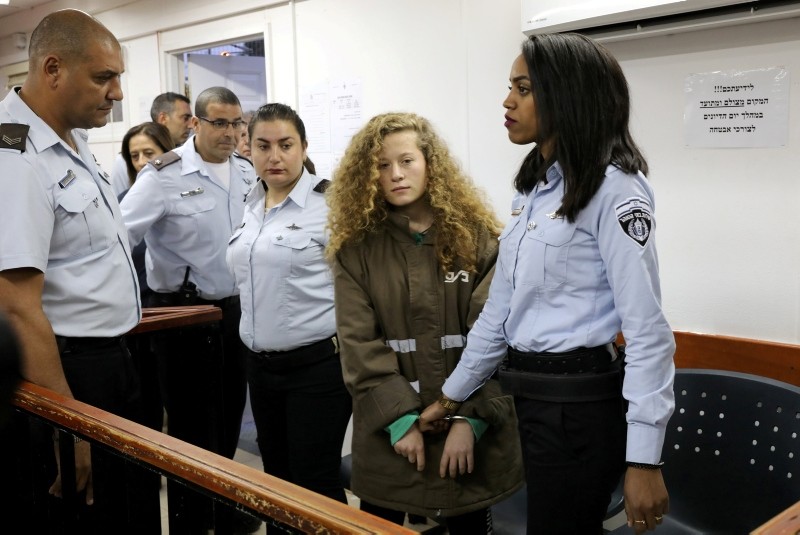 Israel's Rimonim Prison on Wednesday rejected a request for the early release of detained Palestinian teen Ahed Tamimi, according to local media reports.

Israel's Channel 10 reported that lawyers for Tamimi, who was sentenced in March to eight months in prison, had unsuccessfully petitioned the prison for the early release of their client.

According to the broadcaster, Israel's Shin Bet security service had recommended earlier that Tamimi not be released ahead of schedule, saying the 17-year-old "should remain behind bars for reasons of deterrence".

There was no immediate confirmation of the decision from the Israeli side.

Tamimi's case gained international attention when footage emerged of her slapping and kicking two Israeli soldiers next to her house in the West Bank in December, with the soldiers not responding to the provocation.

Tamimi was later arrested and eventually accepted a plea bargain in which she was sentenced to an eight-month prison term due to end in mid-July.

The video of Tamimi's confrontation with the soldiers went viral, with some Israelis saying it was an example of the army not responding to provocations, but others saying the soldiers were humiliated.

Palestinians said she repeatedly told the soldiers to leave her land, which is considered occupied under international law.

A cousin of hers had been shot in the head earlier in the day during clashes with Israeli soldiers, her lawyers have said.

Critics of Israel have contrasted her eight-month sentence with the nine months eventually served by an Israeli soldier who shot dead an injured Palestinian attacker as he lay on the ground.

According to Palestinian figures, roughly 6,500 Palestinians -- including some 350 minors -- are currently languishing in Israeli prisons.