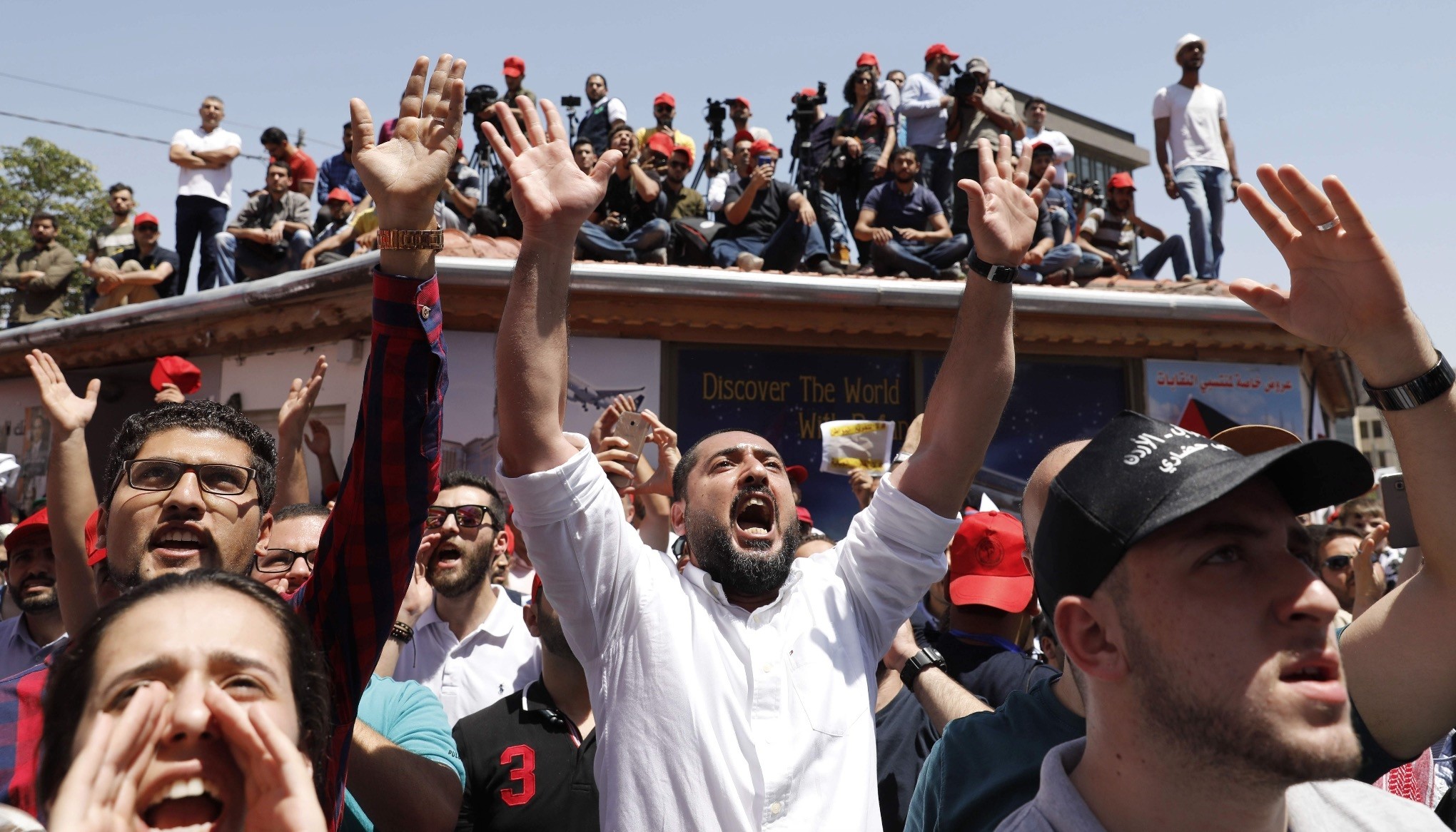 Demonstrators chant slogans in front of the Labor Union offices in Amman, June 6.
by Yusuf Selman İnanç Jun 07, 2018 12:00 am

Thousands of protesters have hit Jordan's streets, challenging the government's new economic measures supervised by the International Monetary Fund (IMF). In response to the mass disquietude, the Jordanian King Abdullah II decided to replace the Prime Minister Hani al-Mulki. However, the king's efforts and the statements from state officials failed to unease the tensions as the protesters vowed to continue demonstrations.

These are some of the biggest demonstrations since the Arab Spring in 2010. The police have so far detained more than 60 people and used tear gas and water against protesters. These demonstrations are likely signals that the Jordanians are feeling the economic pressure of being surrounded by multiple wars in the region.

Jordan, one of the poorest countries in the Middle East, is surrounded by the Israeli-Palestinian conflict, the Syrian war, the instability in Iraq, and Saudi Arabia's deserted regions. The country has no natural resources and suffers from chronic drought. Production and manufacturing activities are very limited in the country, making it dependent on the foreign aid and debts.

In recent years, the kingdom saw it economy worsen as the country sank more into debts, reaching up to $40 billion. The average Jordanians felt the heat of the worsening economy. Several new taxes were introduced; prices were constantly going up and the unemployment rate hit 18 percent. The increasing living costs made capital Amman one of the most expensive cities in the Arab world.

According to a new plan for coping with the country's debts, introduced at the beginning of this year, sales tax was increased and bread subsidies were scrapped. The new plan, yet to be approved by the parliament, pushes up tax rates for banks from 35 to 40 percent, which will obviously affect house and car sales. Moreover, the government is planning to raise the tax ceiling for an ordinary family from $22,000 to $34,000 annually.

The government hopes the new plan would put the economy back on track before 2020. However, the government's current strategy looks to repay debts using more expensive loans. Although initially, the anger of the protesters had focused on this new plan and the recent taxes, reports suggested that they demand more than that. They have called for a more transparent and accountable government as well as major changes to several national policies. Jordanian Protesters on social media have claimed that the new bills would add more burdens to the middle class while crippling the chances of surviving for the poor.

The war in Syria has cut off most of Jordan's crucial trade routes. Given its border with Israel remain closed and its crossing with Saudi unsuitable for business, the country seems to be trapped. Added to that is the influx of more than a million Syrian refugees and the country's economy has taken a profound hit. The emergence of Daesh in the region and the instability in Iraq has not helped either.

Jordan's king has appointed Omar al-Razzaz as the new prime minister. However, the Jordanian state news agency, PETRA is yet to confirm the appointment.

Al-Razzaz is a Harvard-educated former World Bank economist. He had decried the new government plans - making him the only figure that can likely calm the protesters. In the Middle East, the IMF is widely seen as a negative foreign actor and an instrument for foreign powers to interfere with domestic policies.