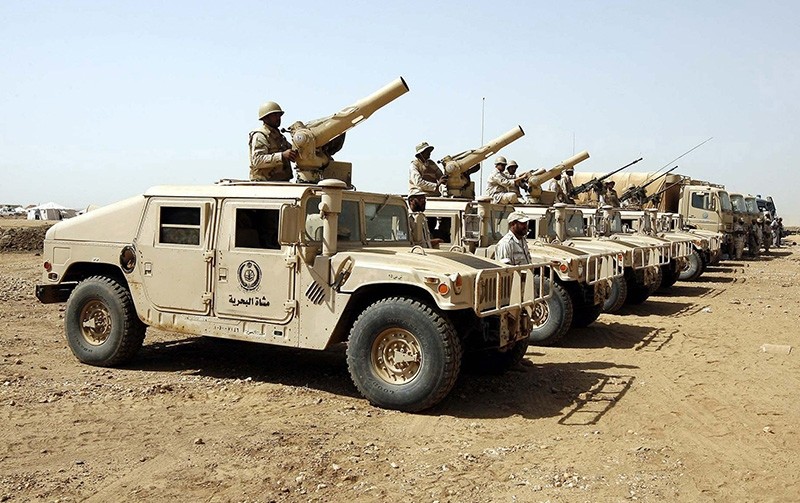 Saudi soldiers atop military vehicles line up for inspection during the arrival of Saudi Prince Khaled bin Sultan bin Abdul-Aziz, assistant minister for defence and aviation, in Jazan near the border with Yemen Nov. 10, 2009. (Reuters Photo)
by Jun 10, 2018 12:00 am

Saudi air defenses on Sunday intercepted a ballistic missile over the southern city of Jazan after being fired from rebel-held territory in neighboring Yemen, a Saudi-led military coalition said.

Debris from the missile landed in residential areas of Jazan without causing casualties, the coalition said in a statement released by the official Saudi Press Agency.

Iran-backed Houthi rebels have in recent months ramped up missile attacks against neighboring Saudi Arabia, which leads a military coalition that has fought the insurgents since 2015.

The attack comes a day after three civilians were killed in Jazan when Houthi rebels fired a "projectile" at the province, according to the coalition.

The strike coincides with the advance of coalition-backed Yemeni forces on the rebel-held Red Sea port of Hodeida, the main conduit for humanitarian supplies into a country teetering on the brink of famine.

In late May, air defenses intercepted Houthi missiles over the southern cities of Najran and Jazan, according to the coalition, which said there were no casualties.

Saudi Arabia last month tested a new siren system for the capital Riyadh and the oil-rich Eastern Province, in a sign of the increasing threat posed by the rebels' arms.

Saudi Arabia, the United Arab Emirates and other allies intervened in Yemen in 2015 to push back the rebels and restore the internationally-recognized government to power after the Houthis ousted it from swathes of the country including the capital Sanaa.

Nearly 10,000 people have been killed since the alliance launched its intervention in Yemen in March 2015, contributing to what the U.N. has called the world's worst humanitarian crisis.