Israel's use of lethal force in Gaza may be war crime, rights watchdog says 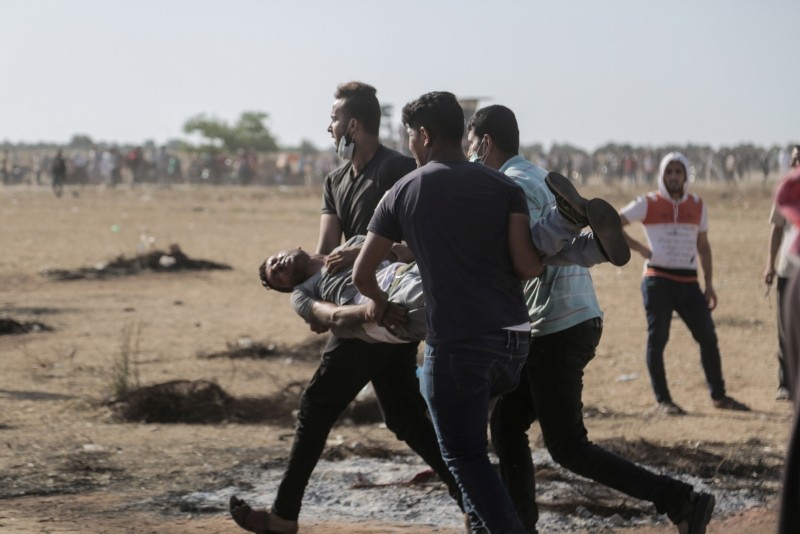 Palestinians protesters carry a wounded protester in clashes during a Friday protest near the border in the east of Khan Younis town southern Gaza Strip, June 8, 2018. (EPA Photo)
by Daily Sabah with Agencies Jun 13, 2018 12:00 am

Israel's use of lethal force against Palestinian demonstrators in the Gaza Strip in recent weeks may constitute war crimes, a human rights watchdog stated. The statement was issued Wednesday ahead of an emergency U.N. General Assembly meeting to vote on a resolution condemning Israel's use of force.

"The United Nations General Assembly should support a resolution that calls for exploring measures to guarantee the protection of Palestinians in Gaza, and a U.N. inquiry mandated to investigate all violations and abuses should identify Israeli officials responsible for issuing unlawful open-fire orders," the statement said.

"The international community needs to rip up the old playbook, where Israel conducts investigations that mainly whitewash the conduct of its troops and the U.S. blocks international accountability with its Security Council veto, and instead impose real costs for such blatant disregard for Palestinian lives," Middle East director at Human Rights Watch (HRW) Sarah Leah Whitson said.

Israel has long been facing international criticism for its harsh response to mass Palestinian protests. Rights groups have branded open-fire orders as unlawful, saying they effectively permit soldiers to use potentially lethal force against unarmed protesters. Israel was sharply criticized by a U.N. human rights body for killing protesters in Gaza and treatment of the Palestinians, declaring it a "war crime" under the Statute of Rome. The high casualty toll triggered a diplomatic backlash against Israel and new charges of excessive use of force against unarmed protesters.

Palestinians have held near-weekly protests since March 30, calling for a "right of return" to ancestral homes now in Israel. According to the U.N., over the past seven weeks, over 100 Palestinian demonstrators have died at the hands of the Israeli military. Among the dead are children, journalists, medics and many young unemployed men. Approximately, 12,000 have been injured. Over 1,000 children have been injured by Israeli forces in the besieged Gaza Strip during demonstrations, according to the U.N. Children's Fund (UNICEF). The U.N. body pointed out that some injuries had been severe and potentially life altering, including amputations. The Israeli authorities said that human rights laws do not apply to ongoing Palestinian protests along the Gaza Strip's eastern border.

The organization called on the international community to "impose real costs for such blatant disregard for Palestinian lives."

Israel has been accused of committing war crimes in its three wars in the Gaza Strip in the last decade. Last month the Palestinians urged the International Criminal Court (ICC) in The Hague to launch an investigation into Israeli policies and actions in the West Bank, east Jerusalem and Gaza Strip, accusing Israel of systemic crimes. Israel has called the Palestinian move "legally invalid." Israel is not a member of the ICC and argues the court does not have jurisdiction. The ICC has conducted a preliminary investigation since 2015 into alleged crimes in the Palestinian territories, including West Bank settlement construction and war crimes by Israel and Hamas in the 2014 war in Gaza. "