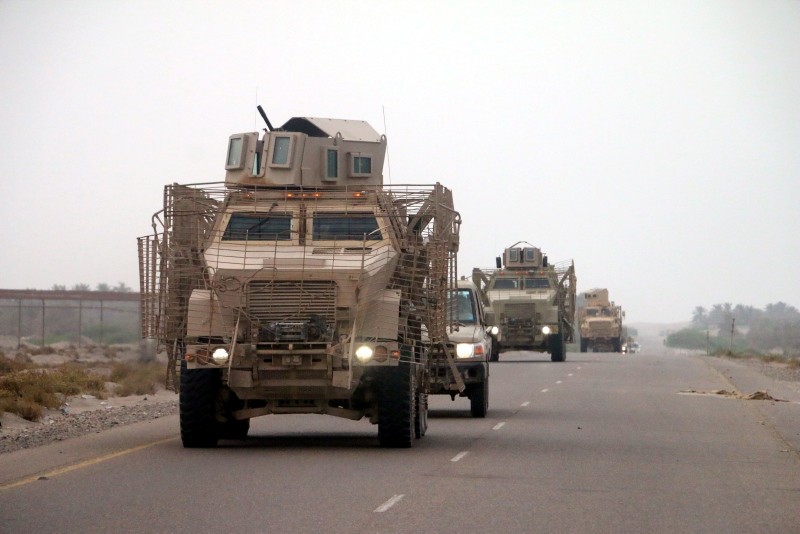 Yemeni forces backed by the Saudi-led coalition gather near the outskirts of the western port city of Hodeidah, Yemen, June 12, 2018. (EPA Photo)
by Compiled from Wire Services Jun 13, 2018 12:00 am

Iranian-aligned Shiite rebels known as Houthis and their allies for years have held the Red Sea port, crucial to food supplies in a nation on the brink of famine after years of war. The battle for Hodeida, if the Houthis don't withdraw, also may mark the first major street-to-street urban fighting for the Saudi-led coalition, which can be deadly for both combatants and civilians alike.

Before dawn Wednesday, convoys of vehicles appeared to be heading toward the rebel-held city, according to videos posted on social media. The sound of heavy, sustained gunfire clearly could be heard in the background.

Yemen's exiled government "has exhausted all peaceful and political means to remove the Houthi militia from the port of Hodeida," it said in a statement. "Liberation of the port of Hodeida is a milestone in our struggle to regain Yemen from the militias."

"The targeted ship was carrying troops prepared for a landing on the coast of Hodeida," the channel said.

Forces loyal to Yemen's exiled government and irregular fighters led by Emirati troops had neared Hodeida in recent days. The port is some 150 kilometers (90 miles) southwest of Sanaa, Yemen's capital held by the Houthis since they swept into the city in September 2014. The Saudi-led coalition entered the war in March 2015 and has received logistical support from the U.S.

The United Nations and other aid groups already had pulled their international staff from Hodeida ahead of the rumored assault.

The assault is the first time since the Western-backed coalition of mostly Gulf states joined the war in 2015 that they have attempted to capture such a well-defended major city. The aim is to box in the Houthis in Sanaa, cut their supply lines and force them to the negotiating table.

UAE-backed Yemeni forces - drawn from southern separatists, local units from the Red Sea coastal plain and a battalion led by a nephew of late former president Ali Abdullah Saleh - are fighting alongside Emirati and Sudanese troops.

Over 10,000 people have been killed in Yemen's civil war, which has displaced 2 million more and helped spawn a cholera epidemic. The Saudi-led coalition has been criticized for its airstrikes killing civilians. Meanwhile, the U.N. and Western nations say Iran has supplied the Houthis with weapons from assault rifles up to the ballistic missiles they have fired deep into Saudi Arabia, including at the capital, Riyadh.

Before the war, over 70 percent of Yemen's food and fuel imports came through Hodeida, accounting for over 40 percent of the nation's customs income. The port remains crucial for incoming aid, food and medicine for a nation driven to the brink of famine by the conflict and a Saudi-led blockade. A Saudi-led airstrike in 2015 destroyed cranes at Hodeida. The United Nations in January shipped in mobile cranes to help unload ships there.

The U.N. says some 600,000 people live in and around Hodeida, and "as many as 250,000 people may lose everything — even their lives" in the assault. Some 8.4 million people in Yemen face pre-famine conditions, according to the World Health Organization.

U.N. Secretary-General Antonio Guterres had said that U.N. envoy Martin Griffiths was in "intense negotiations" in an attempt to avoid a military confrontation. However, Griffiths' recent appointment as envoy and his push for new negotiations may have encouraged the Saudi-led coalition to strengthen its hand ahead of any peace talks with the Houthis.

The U.N. International Committee of the Red Cross (ICRC) called on Wednesday for all sides in Yemen's war to protect civilians.

"Under international humanitarian law, parties to the conflict have to do everything possible to protect civilians and ensure they have access to the assistance they need to survive," Lise Grande, U.N. humanitarian coordinator for Yemen, told Reuters by email.

In Geneva, ICRC spokeswoman Marie-Claire Feghali said that the assault was "likely to exacerbate an already catastrophic humanitarian situation in Yemen", where water and electricity networks are vital to the civilian population's survival.

The attack also comes as Washington has been focused on President Donald Trump's recent summit with North Korean leader Kim Jong Un. A statement from Secretary of State Mike Pompeo said Monday he spoke with Emirati officials and "made clear our desire to address their security concerns while preserving the free flow of humanitarian aid and life-saving commercial imports."

"It's providing any intel, or anything we can give to show no-fire areas where there are civilians, where there's mosques, hospitals, that sort of thing — (and) aerial refueling, so nobody feels like I've got to drop the bomb and get back now," he said.

It wasn't immediately clear what specific American support the coalition was receiving Wednesday.

The alliance intervened in Yemen to restore the government of President Abd-Rabbu Mansour Hadi and thwart what Riyadh and Abu Dhabi see as the expansionist aims of their Shiite foe, Iran.

"The liberation of the port is the start of the fall of the Houthi militia and will secure marine shipping in the Bab al-Mandab strait and cut off the hands of Iran, which has long drowned Yemen in weapons that shed precious Yemeni blood," the exiled government said in a statement carried by state-run Yemeni media.

The Houthis deny they are Iranian pawns and say their revolt aims to target corruption and defend Yemen from invaders.

Yemen lies beside the southern mouth of the Red Sea, one of the most important trade routes in the world for oil tankers, which pass near Yemen's shores while heading from the Middle East through the Suez Canal to Europe.

The UAE has said coalition forces plan to keep the port operational but warned that the Houthis could sabotage infrastructure and place land and sea mines as they withdraw.

Reem al-Hashimy, the UAE minister of state for international cooperation, has said if the port is wrested from the Houthis, the coalition could ease controls, aimed at denying the group arms, and so improve the flow of goods and aid into Yemen.

Riyadh says the Houthis use the port to smuggle in Iranian-made weapons, including missiles that have targeted Saudi cities. The accusations are denied by the group and Iran.