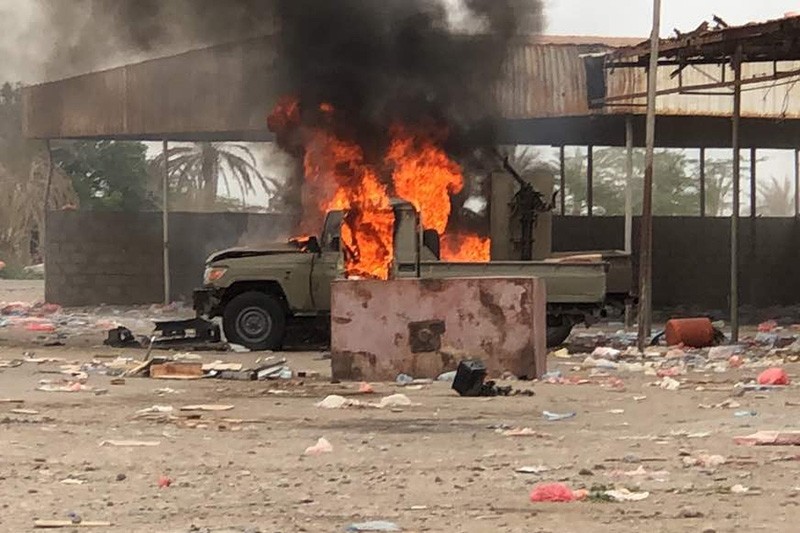 This picture shows an armored vehicle on fire as Yemeni pro-government forces conduct an attack on Houthi rebels positions in the area of al-Fazah in Yemen's Hodeida province on June 16, 2018. (AFP Photo)
by Compiled from Wire Services Jun 17, 2018 12:00 am

The Yemeni army on Sunday announced the capture of several military positions from Houthi rebels in Yemen's southwestern Taiz province.

"The army's 17th Infantry Brigade was able to liberate the Dar Qasim, Esilah and Nuba areas, along with large parts of Al-Hajar village on the Al-Abadala front in Taiz's western Maqbanah district," the army-affiliated SeptemberNet website quoted an unnamed military source as saying.

According to the source, Houthi rebels suffered "heavy" human and material losses in fierce fighting that occurred on Saturday.

"Army engineering units have defused more than 15 landmines planted by the Houthis in liberated areas," the source was quoted as saying.

Anadolu Agency was unable to independently verify the source's assertions.

Meanwhile, the U.N. envoy for Yemen was in rebel-controlled capital Sanaa for a second day Sunday to hold emergency talks over the key aid port of Hodeida, where a regional coalition is battling Houthi rebel fighters.

Martin Griffiths was believed to be pushing a deal for rebel leaders to cede control of the Red Sea port to a U.N.-supervised committee and halt heavy clashes against advancing government troops backed by Saudi Arabia and the United Arab Emirates.

The envoy did not make any statement on his arrival at Sanaa international airport on Saturday.

UAE Minister of State for Foreign Affairs Anwar Gargash on Twitter backed "the envoy's efforts to facilitate the safe handover of Hodeida to the legitimate Yemeni Government."

"The people of Hodeida urgently want to be liberated. The coalition will continue with its military and humanitarian preparations to achieve this urgent result," Gargash wrote.

More than 70 percent of Yemeni imports pass through Hodeida's docks and the fighting has raised U.N. fears of humanitarian catastrophe in a country already teetering on the brink of famine.

Since Yemen's government and its allies launched their offensive on Wednesday, at least 139 combatants have been killed, according to medical and military sources.

The Houthi rebels have controlled the Hodeida region with its population of some 600,000 people since 2014.

Earlier this year, the Saudi-led coalition imposed a near-total blockade on the city's port alleging it was being used as a conduit for arms smuggling to the rebels by its regional arch-rival Iran.

The capture of Hodeida would be the coalition's biggest victory of the war so far, and rebel leader Abdel Malek al-Houthi on Thursday called on his forces to put up fierce resistance and turn the region into a quagmire for coalition troops.

The Yemeni army on Saturday claimed it had seized control of the rebel base at Hodeida's disused airport, which has been closed since 2014.

An Agence France-Presse (AFP) correspondent on the front line could not confirm the report and a spokesman for the coalition, which has troops taking part in the offensive, did not respond to repeated requests for comment.

But military sources later denied that the army had entered the airport.

They told AFP, however, that sporadic clashes were underway at the airport's southern gate.

The highway between Hodeida and the government-held port of Mokha was also the scene of fighting, they said, adding that loyalist forces had suffered "losses."

The United Nations and relief organizations have warned that any all-out assault on Hodeida would put hundreds of thousands of people at risk.

The fighting is already nearing densely populated residential areas, the Norwegian Refugee Council warned, and aid distributions have been suspended in the west of the city.

The International Committee of the Red Cross said thousands were likely to flee if the fighting continued.

The World Health Organization called on all sides "to protect health workers and their facilities from harm, as well as to ensure unimpeded access for medical teams seeking to treat the wounded."

On Thursday, the U.N. Security Council demanded that Hodeida port be kept open to vital food shipments but stopped short of backing a Swedish call for a pause in the offensive to allow for talks on a rebel withdrawal.

The Yemen war has claimed some 10,000 lives since the coalition intervened in 2015 when President Abedrabbo Mansour Hadi fled into exile to Saudi Arabia when the rebels overran much of the country.

More than 22 million Yemenis are in need of aid, including 8.4 million who are at risk of starvation, according to the U.N., which has described the conflict as the world's worst humanitarian crisis.