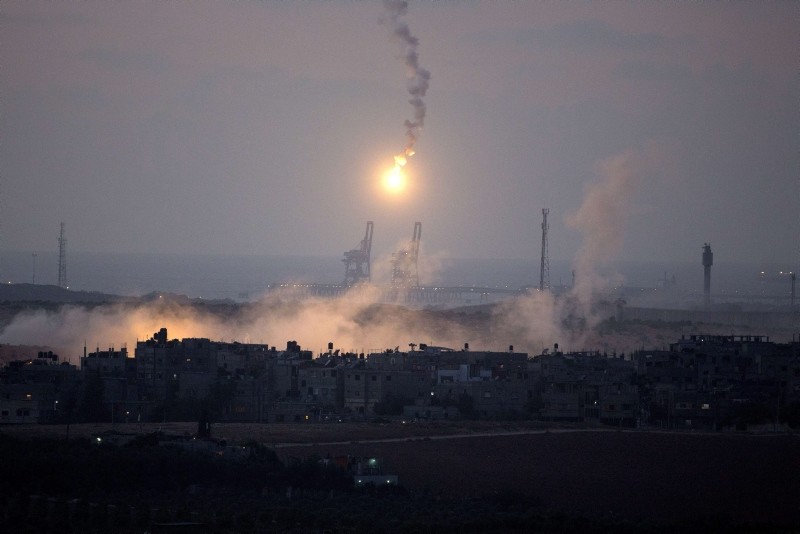 A photo taken on July 15, 2014 from the southern Israeli Gaza border shows Israeli army flares falling into the Palestinian enclave. (AFP Photo)
by Compiled from Wire Services Jun 20, 2018 12:00 am

Israeli fighter jets hit 25 targets in the Gaza Strip early Wednesday in response to rocket fire from the Palestinian territory, the army said.

Around 45 rockets were fired overnight from Gaza towards Israel, the army said in a statement. Seven were intercepted by the Iron Dome missile defense system.

In retaliation, Israeli planes carried out three raids against military compounds belonging to Hamas, it said.

Fawzi Barhoum, a spokesman for Hamas, praised the attacks on Israel but did not take responsibility for them.

The pre-dawn exchange of fire comes at an especially tense time as around 130 Palestinians have been killed along the Gaza border in recent months as Palestinians stage mass demonstrations there.

Palestinians are demanding the right to return to the homes their families fled or were expelled from during the 1948 war surrounding the creation of Israel.

U.N. Secretary General Antonio Guterres and other international stakeholders have warned that Gaza is close to the brink of war.

Israel and Hamas have fought three wars since 2008 and observe a tense ceasefire that is regularly shaken by hostile acts.