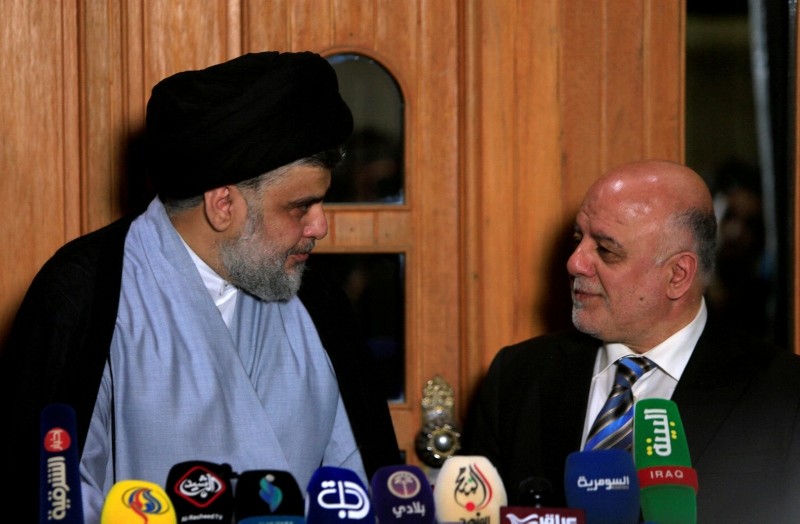 Iraqi Prime Minister Haider al-Abadi and cleric Moqtada al-Sadr said on Saturday their political blocs would enter into an alliance, bringing Iraq one step closer to forming a new government after an election marred by low turnout and fraud allegations.

The alliance between Abadi's Victory Alliance, which came third in a May parliamentary election, and Sadr's Saeroon list, which won the largest number of seats, is the latest in a series of agreements between Iraqi political leaders.

"We announce a cross-sectarian, cross-ethnic alliance to speed up forming the next government and to agree on common points that guarantee the interests of the Iraqi people," Sadr said at a news conference in the Shi'ite holy city of Najaf.

He called for a wider alliance consisting of all components of Iraqi society that would form an inclusive government.

Sadr presents himself as a non-sectarian nationalist opposed to both the United States and Iran's influence over his country. Saeroon is an electoral alliance between Sadrist politicians, the Iraqi Communist Party, and other secular candidates.

Yet earlier in June Sadr went into an alliance with Hadi al-Amiri, a Shi'ite militia commander with close ties to Iran whose Fatih coalition came second in the election.

That alliance will not be compromised by the new one with Abadi, the prime minister said.

"I affirm that this alliance is not in contrast to any other alliances either of the two lists have previously entered into with other blocs, rather, it flows in the same direction and same principles," said Abadi.

The top three winning blocs, all Shi'ite-led, have upwards of 140 seats between them. At least 165 seats are needed to form a government although traditionally the ruling bloc in parliament tends to be larger so as to include Sunni Arab and Kurdish lawmakers.

Abadi and Sadr both called on the leaders of other blocs to meet and "agree on the coming steps" in order to speed up the formation of an inclusive Iraqi government.

Political leaders in Iraq traditionally hold such meetings after elections as part of the lengthy and often complicated process of forming a coalition government, as no one party ever wins enough seats to form a government on its own.

The process is further complicated this time round because the next parliament is born of an election marred by historically low turnout and allegations of fraud.

The outgoing parliament has mandated a nationwide manual recount of votes and Iraq's top court upheld that move, which faced legal challenges.

Political leaders need to meet soon in order to end that "crisis" and speed up the process, Abadi said.