More than half of Israeli soldiers smoke cannabis: report 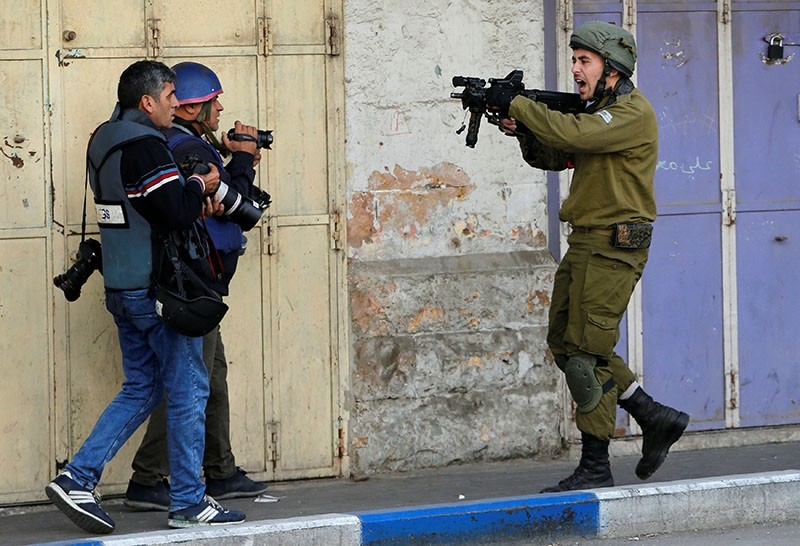 An Israeli soldier shouts as he aims his weapon during clashes with Palestinian demonstrators at a protest against U.S. decision to recognize Jerusalem as the capital of Israel, in the West Bank city of Hebron Dec. 15, 2017 (Reuters Photo)
by Daily Sabah Jun 24, 2018 12:00 am

More than half of the soldiers serving in Israel's military have smoked cannabis in the past year, as use in the occupied Palestinian territories has reached a high, a recent report by Israel Anti-Drugs Authority (IADA) said.

The Israeli military adopted a more lenient policy on cannabis use in January 2017, allowing Israeli Defense Forces (IDF) soldiers to smoke up to five times while off duty.

According to IADA's statistics, the decision to relax disciplinary action in favor of "treatment instead of criminal enforcement" has only increased use of marijuana, as soldiers say that even on military bases, use of the drug is more common than ever before.

The report said 54.3 percent of Israeli soldiers said they smoked cannabis over the past year, and 40.9 percent said they used the drug in the past month.

Even for those who smoke cannabis on duty or more than five times do not face court-martials or criminal charges under the current regulations, according to Hebrew-language Yedioth Ahronoth daily newspaper.

IDF soldiers have testified that their commanders have permitted drug use to continue unpunished, and even allowed them to receive security clearances.

"I told my commander, the platoon commander and the company commander that I smoke. I do not have a permit to smoke in terms of a medical license or anything like that, but I promised them that I do it when I'm home and not at the base, and they have no problem with that," one soldier in a secret unit said.

"I even went through the security classification after I told him that I smoked," the unnamed soldier added.

"The commanders also smoke, the staff smokes, the medical sergeant smokes, everyone smokes, so who will enforce this? The company commander may not smoke but is aware of all the soldiers who smoke. He sees them walking away and then coming back a little tired, but he ignores it. It does not bother him, if they are not in an operational activity or there isn't a danger," the soldier said.

The report said the messaging application Telegram has become a sales platform for cannabis, with some sellers offering discounts for Israeli soldiers in uniform.

Some soldiers have picked up dealing as a second job to supplement their income. One unnamed soldier working in the occupied Palestinian territories testified:

"I buy a quantity of two hundred grams each time and sell in packages of 5 or 10 grams. I earn up between 10,000 and 15,000 shekels net a month. I buy per gram of cannabis at about 35 shekels and sell to my customers at 60 per gram. I bought a car, I saved 35 thousand shekels. Israelis like to do drugs. They like to escape from stress, and find a little quiet."

Prior to January 2017, soldiers were subject to court martial for possessing any narcotics, including cannabis, even in a civilian setting, and were handed a criminal notice on their record.

Though the revised policy technically still permits soldiers to be charged for drug use, a series of loopholes have allowed the military to avoid criminal proceedings altogether.

Israel has come under heavy criticism from the international community for its unrestrained use of force against Palestinians, especially in recent months. The U.N. Human Rights Council has declared Israeli forces' massacre of scores of Palestinian protesters in Gaza a "war crime" under the Statute of Rome.