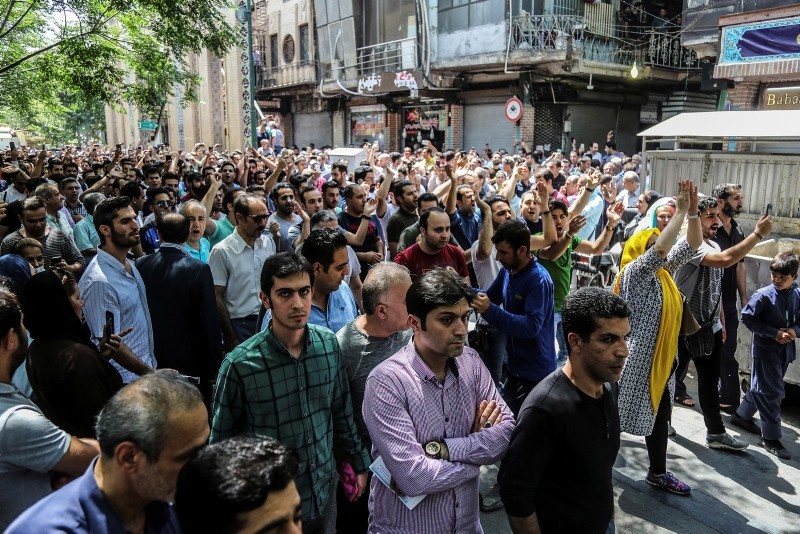 Protesters in the Iranian capital swarmed its historic Grand Bazaar on Monday, news agencies reported, and forced shopkeepers to close their stalls in apparent anger over the Islamic Republic's troubled economy, months after similar demonstrations rocked the country.

The unplanned demonstration came a day after protests forced two major shopping centers for mobile phones and electronics to close in Tehran. It also signaled widespread unease beneath the surface in Iran in the wake of President Donald Trump's decision to withdraw the United States from Tehran's nuclear deal with world powers.

It wasn't immediately clear who led the protests. Iran's semi-official news agencies Fars, ISNA and Tasnim described the protests as erupting after the Iranian rial dropped to 90,000 to the dollar on the country's black market, despite government attempts to control the currency rate.

Videos posted to social media showed protesters at the bazaar heckling shopkeepers who refused to close, shouting in Farsi: "Coward!"

The head of Iran's Chamber of Guilds, Ali Fazeli, later was quoted by Tasnim as saying the situation at the bazaar is calm.

"Their demands are delivered through the chamber to the government, and these are being pursued by us," he said.

Tehran's sprawling Grand Bazaar has long been a center of conservatism in Iranian politics and remains an economic force within the country — despite the construction of massive malls around the city. Bazaar families opposed the Iranian Shah Mohammad Reza Pahlavi and supported the 1979 Islamic Revolution that saw him replaced by the Shiite theocracy and elected officials.

At the end of last year, similar economic protests roiled Iran and spread to some 75 cities and towns, becoming the largest demonstrations in the country since its 2009 disputed presidential election. The protests in late December and early January saw at least 25 people killed and nearly 5,000 people arrested by authorities.

However, those protests largely struck Iran's provinces as opposed to Tehran itself. Analysts believe hard-liners likely encouraged the first protest that took place in Mashhad to weaken the administration of President Hassan Rouhani, a relative moderate cleric within Iran's politics. The protests then spiraled out of control, with people openly criticizing both Rouhani and Supreme Leader Ayatollah Ali Khamenei.

Rouhani's government has struggled with the economic problems, which have seen high unemployment. A government-set exchange rate of 42,000 rials to $1 has quickly been surpassed in the black market. On Monday, state television quoted Iranian Central Bank chief Valiollah Seif as saying the government plans to create a parallel market next week to combat the black market.

Meanwhile, some hard-liners have called for new elections or for Rouhani's civilian government to be replaced by a military-led one. The Fars news agency, believed to be close to Iran's hard-line paramilitary Revolutionary Guard, made a point Monday to publish an article from the Sobh-e No daily newspaper describing the government as being ready to "bow down to foreign threats and sit at the negotiation table."