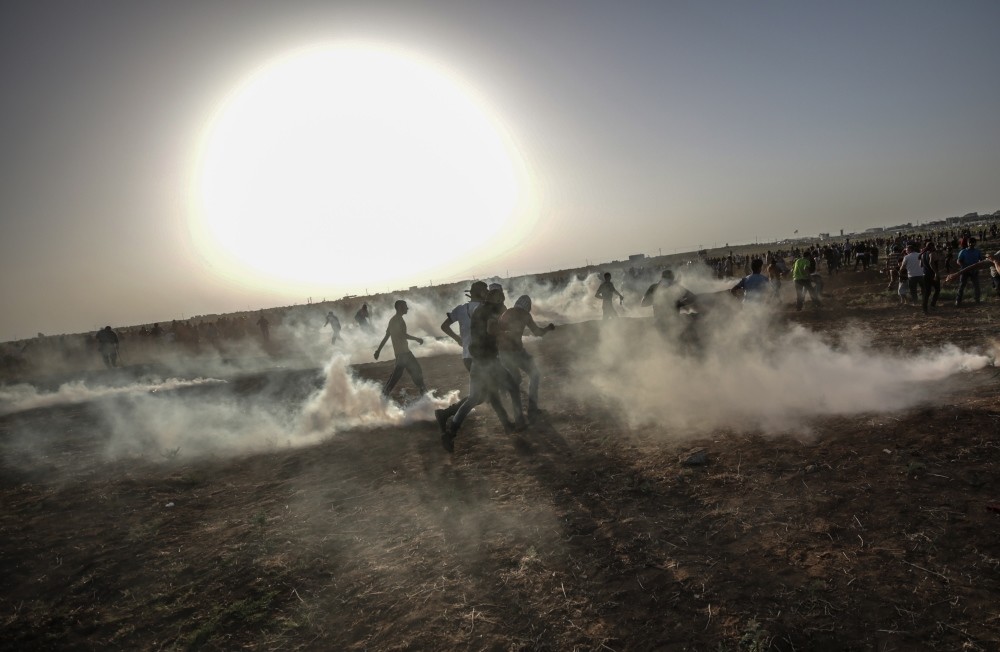 Palestinians protesters run for cover from Israeli tear-gas during clashes after a protest near the border, Gaza City, June 22.
by Compiled from Wire Services Jun 25, 2018 12:00 am

President Trump's son-in-law and senior adviser said Washington will soon present its Israeli-Palestinian peace plan, with or without input from Palestinian President Abbas

In an interview published in the Arabic language Al-Quds newspaper, Jared Kushner appealed directly to Palestinians and criticized Abbas, who has shunned the Trump team over its alleged pro-Israel bias, particularly on the fate of contested Jerusalem.

The interview came out after a week-long trip around the region by Kushner and Mideast envoy Jason Greenblatt. The team met with leaders of Israel, Jordan, Qatar, Egypt and Saudi Arabia to discuss the worsening humanitarian situation in Gaza and the administration's proposals for a peace deal.

Palestinian leaders have blasted the Trump negotiating team in recent days. Senior Palestinian negotiator Saeb Erekat accused Kushner and Greenblatt on Saturday of trying to topple the Abbas-led West Bank autonomy government and dismantle the U.N. aid agency for Palestinian refugees. The Palestinian Authority (PA) slammed U.S. attempts to bypass Palestinian rights as "illusions." "American ideas or deals that bypass the Palestinian position on Jerusalem, statehood and refugees will only lead to a dead end," PA spokesman Nabil Abu Rudeina said in a statement cited by the official Wafa news agency, as reported by Anadolu Agency (AA). The spokesman said peace could only be achieved through fulfilling the Palestinian right to statehood.

Any peace plan would face major obstacles, including the increasingly dire humanitarian situation in the Gaza Strip, internal Palestinian divisions and recent cross-border violence between Gaza's Hamas rulers and Israel. It remains unclear how the Trump administration would proceed with a peace plan without Palestinian cooperation.

Kushner said the plan is "almost done," but offered scant details aside from the promise of economic prosperity. He made no mention of a Palestinian state arising alongside Israel.

Kushner cast doubt on Abbas' ability to make a deal, alleging that the Palestinian leadership is "scared we will release our peace plan and the Palestinian people will actually like it" because it would offer them a better life, according to the Associated Press.

Abbas spokesman Nabil Abu Rdeneh responded to Kushner's interview by restating that American efforts will yield no result if they bypass the Palestinian leadership, and if they are not aimed at an independent Palestinian state with east Jerusalem as its capital.

The quartet on the Middle East, consisting of the United States, Russia, the United Nations and the European Union, is no longer a relevant mediator in the peace process, Abbas earlier stated. Since 2002, a quartet of Middle East peace negotiators has been assigned to promote peace efforts but has failed to get any results.Palestinian leaders have refused to meet with the Trump team since the president recognized Jerusalem as Israel's capital in December. Relations between Washington and the Palestinians have been severely strained since President Donald Trump's December decisions to recognize Jerusalem as Israel's capital and to move the American embassy there. As Trump's policies appear to favor Israel more than those of his predecessor Barack Obama, Abbas has resisted, saying the U.S. "can no longer play a leading role" in peace efforts. Abbas has refused any contact with Trump's administration since Washington's recognition of Jerusalem as Israel's capital at the end of last year. Jerusalem is an emotional issue at the epicenter of the Israeli-Palestinian conflict. Israel captured the city's eastern half, home to holy sites for Jews, Christians and Muslims, in the 1967 Mideast war and annexed it. Palestinians seek east Jerusalem as capital of a future state.