Iranians, fed up with wars, take to streets as economy worsens 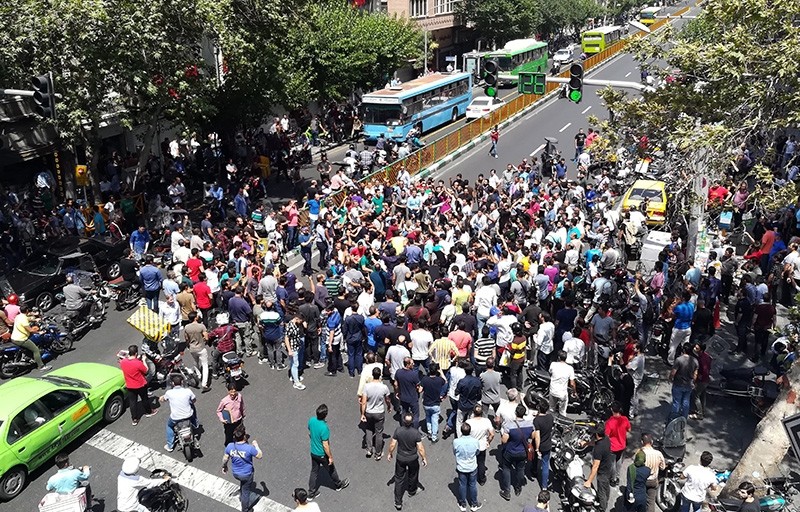 As U.S. President Donald Trump has been increasing pressure on Iran through imposing new sanctions, people on the streets are blaming their own government’s expansionist foreign policy

Iranian people were hopeful when the former U.S. President Barack Obama agreed to sign a deal curbing Iran's nuclear power but in return lifting economic sanctions. However, with Donald Trump's access to the presidential post things have changed.

The strong statements against Iran by the U.S., Israel's threats to erase the country from Syria and the Gulf's increasing hostility over the war in Yemen have led to foreigner investors changing their minds and the flow of goods and raw materials have sharply decreased. This has resulted in people taking to the streets in the capital to protest the government as the country's currency was devalued in the last week.

In Tehran's Grand Bazaar, which is the most significant economic area in the country, as well as important for its political meaning as the revolution in 1979 had begun in that bazaar, crowds have been chanting slogans against the regime, targeting its policies. This is the second wave of protests this year as the previous one last December and January had been suppressed by the police forces. Police were there to confront protesters once again as the masses wanted to march to the Parliament.

The value of the U.S. dollar has been increasing, as a result of which the prices of raw materials increase too. Moreover, the U.S. is on its way to impose new sanctions. Iran, which is the third-biggest oil and second-biggest natural gas producer in the world, is to be barred from selling its oil. "Companies that buy Iranian crude oil must completely cut those exports by the start of November or else they will face powerful U.S. sanctions," a senior State Department official told reporters on Tuesday.

As soon as this threat was broadcast, the Iranian riyal lost more value. This time, the U.S. official mentioned certain countries, including Turkey, which buys oil from Iran. "The State Department has conveyed that message to European diplomats in recent talks. The Trump administration has not yet held talks with China, India or Turkey about their purchases of Iranian crude, but it intends to pressure them to entirely cut their imports under threat of sanctions," the official added. Iran exports more than two billion barrels a day.

In response to the U.S.' statements, Iran responded in a similar way as it does in general. General Yahya Rahim-Safavi, a senior adviser to the country's Supreme Leader Ali Khamanei said, "It is all of our duty to work together to help the respected government and other governmental branches in solving the economic problems. We must neutralize the plans of the enemy for an economic war and psychological operations." The supreme leader also called on the judiciary to secure business and lives through confronting those who disrupt economic security.

While this verbal confrontation continues between Iran and the U.S., people on the streets chant slogans against their own government, targeting its foreign policy. "Death to America," or "Death to Israel" are the most common slogans, which are frequently heard in Iran's streets. Yet, this time, videos, circulating on social media were showing that the protesters were saying "Death to Palestine." Elsewhere, the slogans were targeting the government's costly war in Syria and Yemen. The demonstrators believe that Iran's expansionist policies cause both economic difficulties and diplomatic disagreements, resulting in the sanctions.