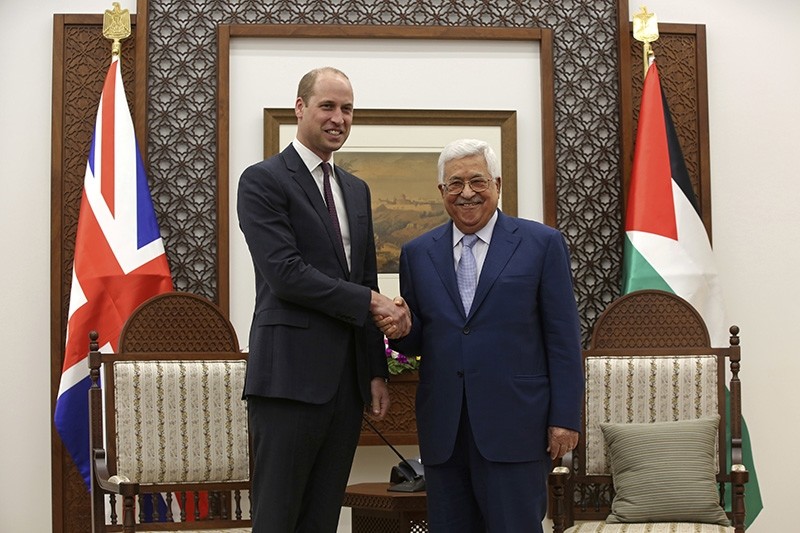 "I am looking for the establishment of a Palestinian state on the lands occupied in 1967, living side by side with Israel in security and stability," Abbas said during his meeting with Prince William, the duke of Cambridge and second in line to the British throne, in the West Bank city of Ramallah.

"Our position has not changed for a long time. We want peace throughout negotiations," he said.

Abbas voiced hope that Prince William's visit will strengthen relations between the Palestinian people and Britain.

"We hope that this is not your last visit, and we hope you visit us again when the Palestinian people get their independence," he addressed Prince William, who arrived in Ramallah from the city of Jerusalem earlier Wednesday.

Prince William, for his part, said he is excited about visiting Palestine and learning about its culture.

"Palestine and Britain have a strong relationship, and we have success stories in the field of education and health, and hope to continue this relationship," he said.

During his visit to Ramallah, Prince William is due to watch a football game and attend a cultural event that would include the traditional Palestinian dance Dabkeh. He is also scheduled to visit the Jalazoun refugee camp north of Ramallah.

Prince William is the first representative of the British royal family to visit Israel and the Palestinian territory. He began his tour to the region by visiting Jordan and Israel for talks with officials in both countries.

The U.K. has not recognized the independent state of Palestine, despite persistent calls to do so by British politicians, including a 2014 motion by the House of Commons.

Ties between Britain and Palestine have been severely strained for most of the past century, after the signing of the Balfour Declaration in 1917 which set out the U.K.'s support for a Jewish homeland in Palestine.