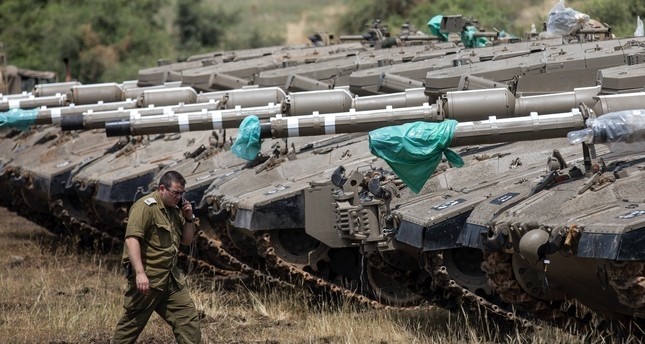 An Israeli soldier walks next to tanks deployed near the Israeli-Syrian border in the Golan Heights, May 9.
by Compiled from Wire Services
Jul 10, 2018 12:00 am

Israel threatened a "harsh response" yesterday to any attempt by Syrian regime forces advancing against southern opposition areas to deploy in a Golan Heights frontier zone that was demilitarized under a 44-year-old U.N. monitored truce between the neighboring foes. Syrian regime forces backed by Russia have launched an offensive in the southern Daraa province and are widely expected to move on opposition-held Quneitra, which is within a part of the Syrian Golan covered by the armistice.

Israel worries that Bashar Assad could let its enemies Iran and Hezbollah move forces into the area, giving them a foothold near its border. Tehran and the Lebanese group both back Assad in the complex conflict.

"For our part we will sanctify the 1974 disengagement agreement, and there too we will insist that every last letter be abided by, and any violation will meet a harsh response from the State of Israel," Defense Minister Avigdor Lieberman told his parliamentary faction in broadcast remarks, The Associated Press reported.

Iran, Lebanon's Hezbollah militia and Russia have been reinforcing Assad against a 7-year-old Syrian rebellion. Since 2013, Iran has increased its military presence in Syria and deployed hundreds of its special operation tro

ops. It is claimed that Iran has been collecting young people from poor countries like Pakistan, Afghanistan and India with the promise of granting citizenship. Iran has helped the Assad regime throughout the war, dispatching thousands of soldiers, mobilizing the Lebanon-based Shiite Hezbollah group and delivering millions of dollars to the regime, despite its troubled economy hurt by international sanctions.

On Sunday night, Syria said its air defense repelled an Israeli sorties against the T4 air base in the Homs province, where seven Iranian Revolutionary Guards Corps personnel died in an April 9 attack that Damascus and Tehran also blamed on Israel.

Assad's conduct in southern Syria is expected to come up in talks in Moscow tomorrow between Israeli Prime Minister Benjamin Netanyahu and Russian President Vladimir Putin. Russia, whose 2015 intervention in the Syrian civil war turned the tide in Assad's favor, has largely turned a blind eye to repeated Israeli air strikes in Syria targeting suspected Iranian or Hezbollah emplacements and arms transfers. Syrian regime forces have surrounded opposition-held parts of the city of Daraa as part of their offensive in the southwestern province, activists said yesterday, according to Reuters.

The city was where the uprising against Assad began seven years ago as part of the Arab Spring wave of protests before Syria descended into a full-blown civil war that has claimed the lives of some 400,000 people and displaced more than 5 million as refugees. Opposition strongholds in southern Syria have been crumbling since the regime launched a ground offensive in the area last month, under the cover of Russian airstrikes. Last week, Russia brokered a deal with the opposition under which they are to hand over their heavy weapons and a main border crossing point with Jordan. Opposition members who rejected the deal are to be evacuated to the country's north.