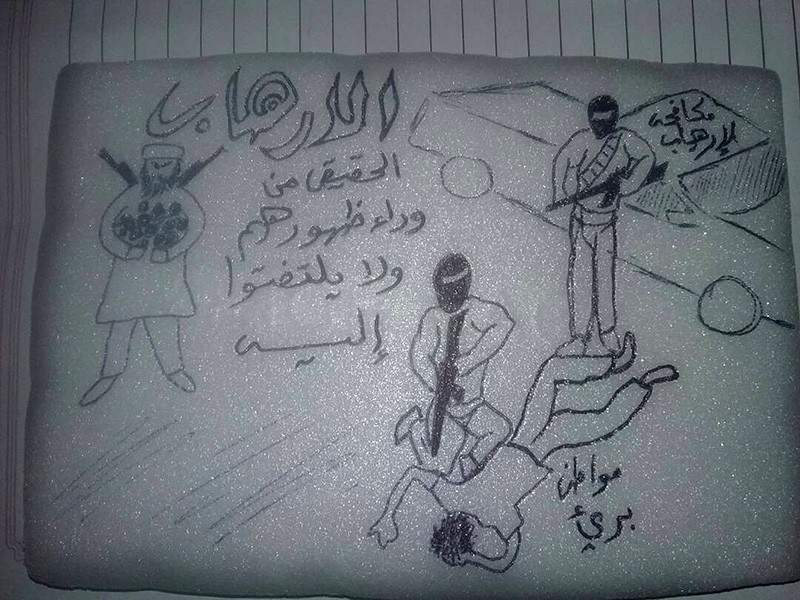 This undated file photo obtained by The Associated Press shows a drawing of a prisoner being abused at a prison in Yemen run by the United Arab Emirates. (AP Photo)
by French Press Agency - AFP
Jul 12, 2018 12:00 am

Human rights violations in a string of Yemeni prisons run by the United Arab Emirates could amount to war crimes, Amnesty International said Thursday in a report promptly rejected by the UAE.

It called for investigations by the UAE and allies including the United States into a network of unofficial prisons across southern Yemen where it said "egregious violations" have been committed, including enforced disappearances and torture.

"Ultimately these violations, which are taking place in the context of Yemen's armed conflict, should be investigated as war crimes," said Tirana Hassan, Amnesty's crisis response director.

"The UAE's counterterrorism partners, including the USA, must also take a stand against allegations of torture, including by investigating the role of U.S. personnel in detention-related abuses in Yemen, and by refusing to use information that was likely obtained through torture or other ill-treatment."

The UAE rejected the report of its involvement in Yemeni prisons, saying it does not manage or run any in the war-torn country.

"Prisons in Yemen are under Yemeni authority and... the UAE has urged the Yemeni government to conduct an independent investigation into the matter," the Emirati government said in a statement carried by the official WAM news agency.

"The UAE believes that these reports are politically motivated to undermine its efforts as part of the Arab coalition to support the Yemeni government," it said.

The United Arab Emirates has played a key role in a Saudi-led military intervention since 2015 to bolster Yemen's President Abedrabbo Mansour Hadi against Iran-backed Houthi rebels.

Both loyalist and rebel forces stand accused of failing to protect civilians in a war that has killed nearly 10,000 people, 2,200 of them children, and pushed the country to the brink of famine.

Amnesty International said it had investigated 51 cases of enforced disappearance at the hands of UAE-backed forces between March 2016 and May 2018.

Nineteen of the men remain missing, it said.

Amnesty said it had collected testimonies from released detainees and relatives of the missing across Yemen.

One former detainee told Amnesty that "UAE soldiers at a coalition base in Aden repeatedly inserted an object into his anus until he bled" and that he was "kept in a hole in the ground with only his head above the surface and left to defecate and urinate on himself in that position."

Since joining the Yemen war in 2015, the UAE has trained, equipped and funded Yemeni security forces known as the Security Belt and Elite Forces.

The UAE has also "built alliances" with Yemeni security officials, bypassing the government, according to Amnesty.