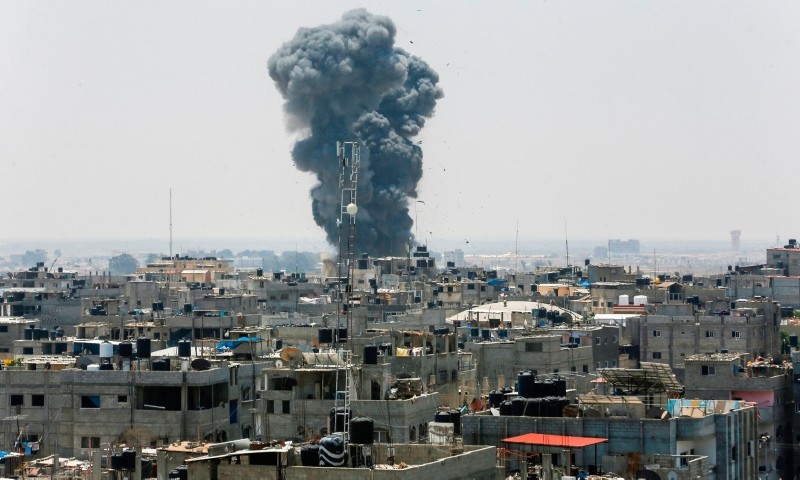 A picture taken on July 14, 2018 shows a smoke plume rising following an Israeli air strike in the southern Gaza Strip city of Rafah, near the border with Egypt. (AFP Photo)
by Associated Press
Jul 14, 2018 12:00 am

The Israeli military carried out its largest daytime airstrike campaign in Gaza since the 2014 war Saturday as Hamas fighters fired dozens of rockets into Israel, threatening to spark a wider conflagration after weeks of tensions along the volatile border.

No casualties or major damage was reported on either side, and Israel said it was focused on hitting military targets and was warning Gaza civilians to keep their distance from certain sites. But it still marked a significant flare-up after a long period of a generally low-level, simmering conflict.

Lt. Col. Jonathan Conricus said the latest Israeli sortie, the third of the day, struck some 40 Hamas targets including tunnels, logistical centers and a Hamas battalion headquarters in the northern city of Beit Lahiya. He said the escalation was the result of the sustained Hamas rocket attacks, its fomenting of violence along the border and its campaign of launching incendiary kites and balloons that have devastated Israeli farmlands and nature reserves.

"Our message to Hamas is that we can and will enhance the intensity of our effort if needed," he said. "What Hamas is doing is pushing them ever closer to the edge of the abyss ... Hamas will have to understand that there is a price to be paid."

Israel has been warning Hamas in recent weeks that while it has no interest in engaging in the kind of conflict that led to the sides fighting three wars over the past decade, it would not tolerate Gaza militants' continued efforts to breach the border and its campaign to devastate Israeli border communities with incendiary attacks.

Saturday's attacks were the largest since 2014 when the Israeli army launched a devastating war on the Gaza Strip, killing more than 2,000 Palestinians and injuring thousands.

On Friday, thousands of Palestinians gathered near the Gaza border for their near-weekly protest. A 15-year-old Palestinian who tried to climb over the fence into Israel was shot dead. Later the military said an Israeli officer was moderately wounded by a grenade thrown at him.

Gaza's health ministry said Saturday that a 20-year-old struck by gunfire Friday during the protests in the southern Gaza Strip had also died of his wounds. More than 220 were also injured, according to the health ministry in the Hamas-run Strip.

The Hamas group that rules Gaza has led border protests aimed in part at drawing attention to the Israeli-Egyptian blockade imposed after Hamas took control of Gaza in 2007. The demonstrations have been fueled in large part by pervasive despair caused by the blockade, which has caused widespread economic hardship. The protests are also in support of Palestinians' right to return to lands they fled or were driven from during the war surrounding the creation of Israel in 1948.

Israel says it is defending its sovereign border and accuses Hamas of using the protests as cover for attempts to breach the border fence and attack civilians and soldiers. Most recently, it has been struggling to cope with the widespread fires caused by the incendiary kites and balloons floating over the border.

Sirens wailed overnight and throughout the day Saturday in southern Israel as waves of rockets and mortars were launched from Gaza amid the airstrikes. Israel said at least six of the projectiles were intercepted by the Iron Dome aerial defense system.

In a relatively rare admission, Hamas said it fired the rockets to deter Israel from further action. Most of the recent rockets from Gaza have been fired by smaller factions but Hamas spokesman Fawzi Barhoum said it was an "immediate response" that was meant to "deliver the message."

Israel said more than 30 rockets and mortars were fired early in the day with fresh barrages resuming each time it attacked. As a precaution, the military shut down a nearby beach.

The military said its jets targeted two Hamas tunnels as well as other military compounds, including those involved in the production of the kites and balloons. Tit said the Hamas battalion headquarters in northern Gaza was completely destroyed.