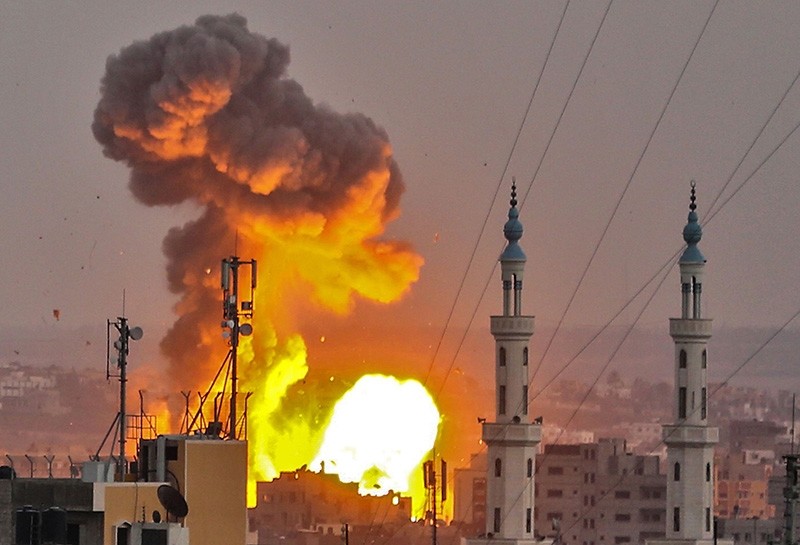 A picture taken on July 20, 2018 shows a fireball exploding in Gaza City during Israeli bombardment. Israeli aircraft and tanks hit targets across the Gaza Strip. (AFP Photo)
by Compiled from Wire Services Jul 20, 2018 12:00 am

Israeli air and ground forces killed four Palestinians in the Gaza Strip on Friday, Palestinian health officials said, as the Israeli military said its troops had come under fire, followed by an agreement between the two sides to restore the calm in the Palestinian enclave.

"With Egyptian and United Nations efforts it has been agreed to return to the era of calm between (Israel) and Palestinian factions," Hamas spokesman Fawzi Barhoum told Reuters.

The military said aircraft and tanks hit eight Hamas positions in Gaza after its forces had been shot at and had explosive devices hurled at them along the border. More airstrikes pounded Gaza as darkness fell in what the military described as a "wide-scale attack against Hamas."

Fireballs exploded into the sky over the Palestinian enclave as the U.N. urged all sides to step "back from the brink" of war after months of tensions.

United Nations Special Coordinator for the Middle East Peace Process Nickolay Mladenov said "everyone in Gaza needs to step back from the brink. Not next week. Not tomorrow. Right NOW!"

"Those who want to provoke Palestinians and Israelis into another war must not succeed," he wrote on Twitter.

However, Israel's defense minister warned of a "much tougher" response to rockets from Hamas.

Hamas said three members of its military wing killed. A fourth Palestinian was shot dead during protests along the frontier with Israel, Gaza's health ministry said.

Two Palestinians were killed in a strike east of Khan Yunis in southern Gaza, the health ministry in the enclave said.

A third man was killed by Israeli fire east of Rafah, also in southern Gaza, the ministry said.

The military wing of Hamas named the three men as Shaban abu Khatar, Mohammed abu Farhana and Mahmoud Qushta, saying they were fighters.

A fourth man named as Mohammed Badwan was later shot dead by Israeli forces during protests along the border, Gaza's health ministry said.

An Israeli soldier was also shot dead by Palestinian gunfire on the Gaza border, the army said.

He was the first Israeli killed since Palestinian protests were launched on the border with the Jewish state on March 30.

Since the rallies in Gaza first began more than three months ago, at least 140 Palestinian demonstrators have been killed -- and thousands more injured -- by Israeli army gunfire.