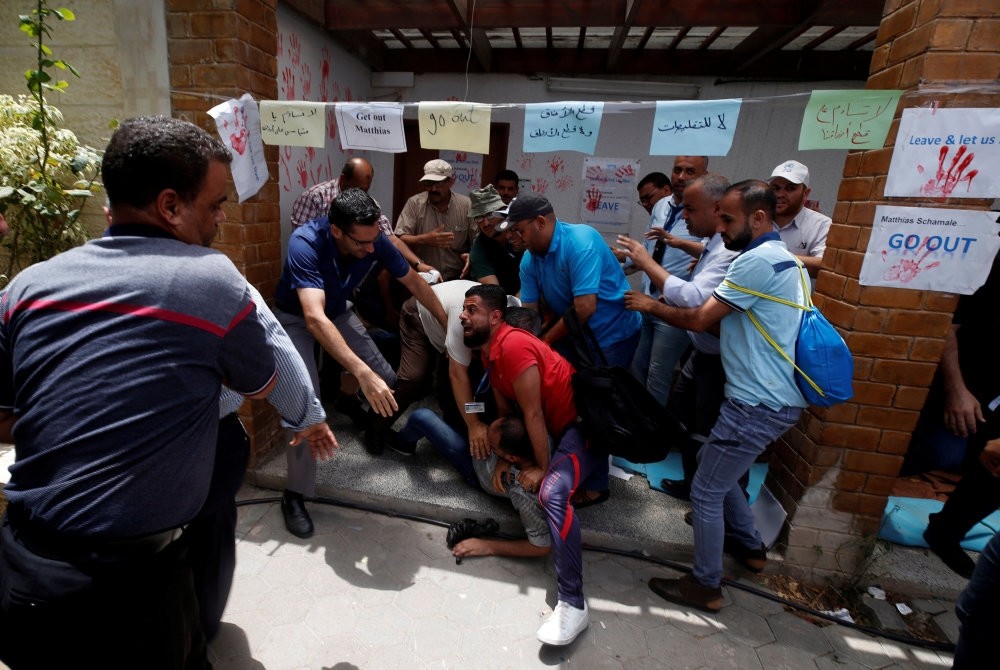 People prevent a Palestinian UNRWA employee from setting himself on fire, Gaza City, July 25.
by Compiled from Wire Services
Jul 26, 2018 12:00 am

As the U.N. Relief and Works Agency for Palestinian Refugees (UNRWA) announced the first job cuts, Palestinians protested against the recent decision to scale down its operations in the blockaded Gaza Strip

The United Nations agency for Palestinian refugees (UNRWA) announced yesterday it was cutting more than 250 jobs in the Palestinian territories after the United States held back hundreds of millions in aid. Hundreds of people rallied outside UNRWA's headquarters in Gaza City to protest against the decision to cut jobs, as the union called for a sit-in. One man tried to set himself on fire but fellow protesters rushed to help him and put out the flames, an Agence France-Presse (AFP) journalist at the scene said. The UNRWA staff union called for a general strike by employees to be held today in Gaza.

In total, 154 employees in the occupied West Bank and 113 in the Gaza Strip will be let go, UNRWA spokesman Chris Gunness said in a statement. More than 500 other full-time staff will be offered part-time contracts, the statement added. The job cuts were the first since the U.S. announced it would only provide the agency with $60 million this year, down from $360 million the previous year. Gunness's statement said the U.S. cut represented an "existential threat" to UNRWA, which had been trying to raise the money from other donors.

Amal al-Batsh, deputy head of UNRWA's staff union, condemned the cuts. "The decisions are unfair and will adversely affect employees and their families," she told AFP.

The agency provides services to more than three million Palestinian refugees across the Middle East and employs more than 20,000 people, the vast majority Palestinians.

In March, UNRWA was forced to end its emergency food program, a move that will likely have an adverse impact on food assistance provided to 1.3 million Palestinian refugees in the blockaded Gaza. UNRWA has struggled with a severe crisis since the U.S. suspended $65 million in promised financial aid late last year. According to the U.N., UNRWA requires some $250 million per year to implement all of its aid programs.

In January, U.S. President Donald Trump linked the cutting of Palestinian aid to the decision by President Mahmud Abbas to refuse to talk with his administration. The Palestinian leadership froze ties with the White House after it recognized the disputed city of Jerusalem as Israel's capital and accuses Trump's administration of blatant bias in favor of Israel.

UNRWA was set up after the 1948 war surrounding the creation of Israel, which saw more than 700,000 Palestinians flee or be expelled from their homes. Israeli politicians have long criticized the agency's existence, arguing it perpetuates the Israeli-Palestinian conflict. UNRWA leadership and Palestinian officials say its presence is necessary until a permanent solution can be found for the refugees in the blockaded Palestinian territories. In Gaza, nearly 2 million men, women and children are already experiencing extreme shortages of water and electricity amid tensions that have worsened between the Palestinians and Israel since President Donald Trump opened a U.S. Embassy in Jerusalem. Since 2007, the Gaza Strip has groaned under a crippling Israeli and Egyptian blockade that has gutted its economy and deprived its roughly two million inhabitants of many vital commodities, including food, fuel and medicine. In the long-embargoed enclave, the humanitarian situation has grown worse each day.