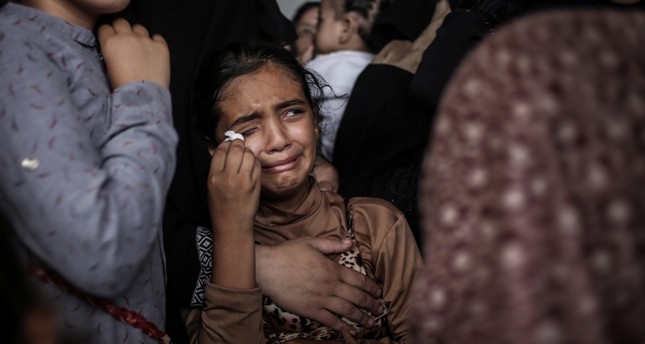 Thousands attended funerals Saturday of three Palestinians killed by Israeli army fire in a border protest a day earlier, including an 11-year-old, a 17-year-old and a man on crutches.

More than 140 Palestinians, most of them unarmed, have been killed and several thousand wounded by Israeli troops since March in such protests led by Gaza's Hamas rulers.

The Gaza Health Ministry said the latest deaths brought to 18 the number of minors, age 18 and under, killed in the past four months.

Human rights groups have accused Israel of the unlawful use of lethal force against the protesters. Israel says it is defending its border and accuses Hamas, a group sworn to its destruction, of using the protests as cover for attempts to breach the border fence and attack civilians and soldiers.

Gaza's Health Ministry said Saturday that Moumin al-Hams, 17, was shot in the chest in the protest on Friday along the fence that separates Gaza and Israel.

Images shared on social media by his friends and relatives show him venturing toward the fence, setting tires ablaze and pushing them toward Israeli forces.

Funerals were also held Saturday for Majdi al-Satari, 11, whose age was previously announced as 14, and for Ghazi Abu Mustafa, 43.

The Health Ministry initially gave Majdi's age as 14. On Saturday, it said his age was 12. A relative said the boy had been born Oct. 3, 2006, meaning he was 11 when he was killed. Al-Mezan, a Gaza-based rights groups, confirmed Majdi's age as 11.

Alaa Abdel-Fattah, a witness, said that on Friday protesters were trying to cut razor wire about 50 yards away from the actual fence. He said Majdi was watching from about 100 meters away. "There were two gunshots from a sniper. One hit one of those cutting the wire in the leg and the other gunshot hit the boy in his head," he said.

Women gathered under the corrugated zinc roofing of the al-Satari's family's house for the funeral.

"I don't know what he did to them (the Israeli soldiers)," she said as she burst in tears. She added that his family tried to prevent him from going to the protests and on one occasion tried to lock him indoors. "It's his fate," she sighed.

"He is a child. He had no bullets or weapons," said the boy's grandmother, identified as Umm Ramzi. "He was standing like all children watching. They shot him from afar. Isn't he a child? Why are they targeting children?"

In a nearby town, resident Hassan Najjar said he witnessed the shooting of 43-year-old Abu Mustafa.

He said soldiers shot at a group of Palestinians who rushed to the border and a bullet hit the man sitting about 250 meters away. He said the man had sustained leg wounds at a previous protest and was still using crutches.

Hamas has led border protests aimed in part at drawing attention to the Israeli-Egyptian blockade imposed after Hamas took control of Gaza in 2007.

The demonstrations have been fueled in large part by pervasive despair caused by the blockade which has caused widespread economic hardship.

Last week a Palestinian sniper killed an Israeli soldier. Another soldier was wounded by Palestinian fire on Wednesday.