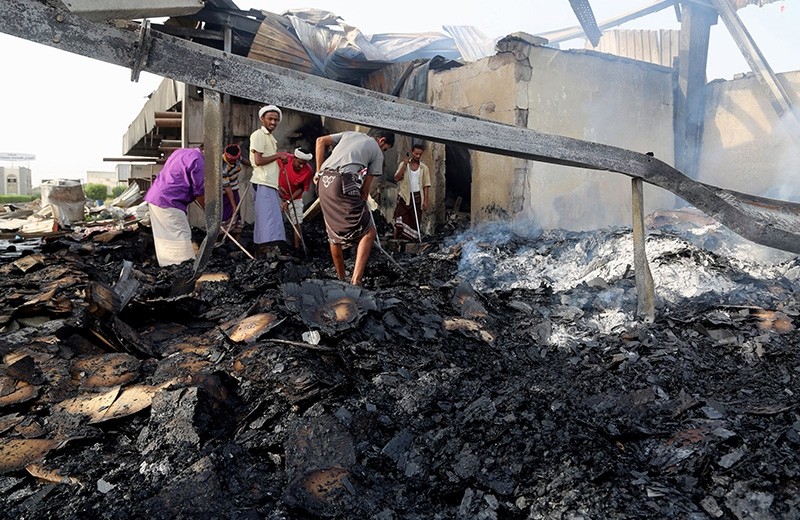 Yemeni men inspect the damages at a factory allegedly targeted by Saudi-led coalition's airstrikes in the Red Sea town of Hodeidah on July 27, 2018. (AFP Photo)
by Compiled from Wire Services Aug 02, 2018 12:00 am

A spokesman from the Houthi rebel group said airstrikes struck in the vicinity of a hospital in the Yemeni port city of Hodeida.

One strike hit a fish market, next to the al-Thawra public hospital.

Shortly after, a second strike hit the gate of the hospital while medics and civilians were taking those injured inside, Youssef al-Hadri, a spokesman for the Houthi-affiliated Health Ministry, told German Press Agency. At least 101 people were injured in the two strikes, he added.

Al-Hadri described the attack as a "war crime."

Thousands of Yemeni children are fleeing bombing attacks on the port of Hodeidah every day, putting them at risk of starvation and disease, aid organizations warned Thursday.

About 6,000 people are abandoning Hodeidah every day, half of them children, the charity Save the Children said, putting the total number forced out since the offensive began in June at more than 330,000.

"With the economy in tatters and health and sanitation facilities throughout the country destroyed, conditions are now rampant for disease and starvation to spread," said Save the Children's Yemen Country Director, Tamer Kirolos.

"Aid agencies are doing what they can to keep people alive but ultimately, our efforts are just a sticking plaster on a gaping wound," he said in a statement.

Hodeidah is the main port of the impoverished Arab country, where around 8.4 million people are believed to be on the verge of starvation, and a lifeline for millions.

The offensive on Hodeidah launched in June by a coalition led by Saudi Arabia and the United Arab Emirates is the largest battle yet in a conflict that has killed more than 10,000 people.

Save the Children said surrounding areas were unable to cope with the huge influx of people fleeing the violence, many of whom were struggling to find food, water and medicine.

Juliette Touma, a spokeswoman for the United Nations children's agency, said attacks last week had a "catastrophic" impact on its ability supply clean water and sanitation to the population.

"These attacks may contribute to the increase of water-borne diseases – especially to children who are prone to diseases like cholera, and (getting) diarrhea," she told the Thomson Reuters Foundation by phone from Amman, Jordan.

"There is a war on children in Yemen – very few places are safe for a Yemeni child."

The U.N. has also warned of the risk to pregnant women in Yemen, which already has one of the world's highest rates of maternal mortality. It estimates 90,000 women in Hodeidah are due to give birth in the next nine months.