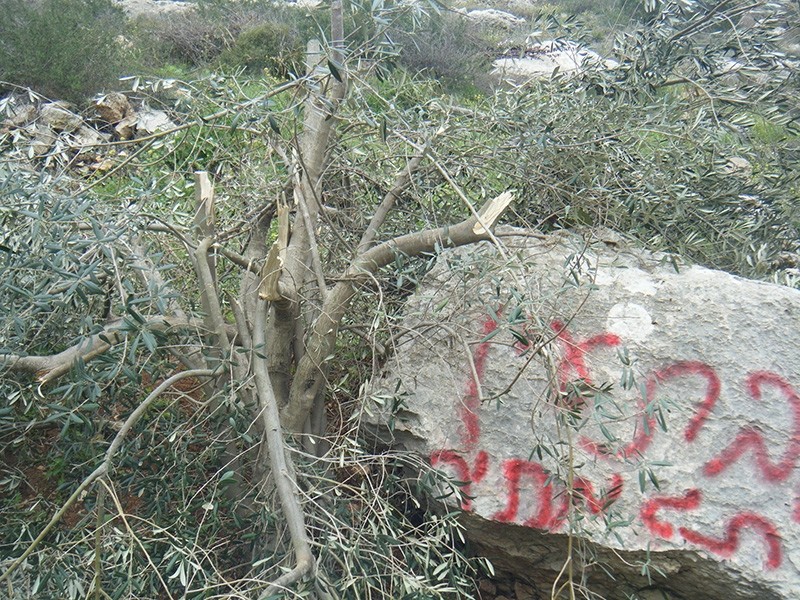 Israeli settlers have destroyed more than 2,000 fruit trees and grapevines belonging to Palestinians in just over two months in the occupied West Bank, according to a report published Sunday by a human rights group.

According to the nongovernmental organization B'Tselem, settlers destroyed the orchards and vineyards, and also burned down bales of hay and a barley field in 10 instances between May 1 and July 7.

In some instances, the settler sprayed hateful graffiti on the farms, saying, "No to farmer terrorism" and "There's no place we won't reach."

"The losses we incurred from the damage to the vines can't be measured in numbers," one farmer in Hebron told B'Tselem after settlers cut down about 700 grape vines.

"We invested seven years of work in those vineyards. Every grapevine cost us hundreds of shekels, in my estimation, by the time it grew and bore fruit… We cared for those vines like we care for our own children, and it all went down the drain in one moment," he said.

While this period marks an uptick in assaults, settler violence and vandalism is a common occurrence in the West Bank, B'Tselem said.

The group also said these incidents have "full backing" from Israeli authorities, as soldiers sometimes take part in the attacks or often stand by and observe. Israeli police do not carry out thorough investigations of the incidents and do not make an effort to prevent or stop them.

Another Hebron farmer who lost 82 vines said: "Maybe we won't replant because the police and army offer no protection. They can do this to us again. In 2010, settlers damaged dozens of trees on another of our plots. We filed a complaint but no one did anything about it. This time I didn't file a complaint, because I don't think there's any point."

Other farmers told B'Tselem that settlers had broken down hundreds of olive trees and almond trees on their properties.

Settler violence serves to benefit Israel, as Palestinians are reluctant to return to or replant areas that have been attacked out of fear of violence and danger. This makes it easier for Israel to eventually take over the resources and land, expanding the occupied territories allocated to illegal settlers.

Nevertheless, Israel continues to aggressively expand its illegal settlements. Some 500,000 Israelis already live in the West Bank and East Jerusalem, areas that are also home to more than 2.6 million Palestinians.