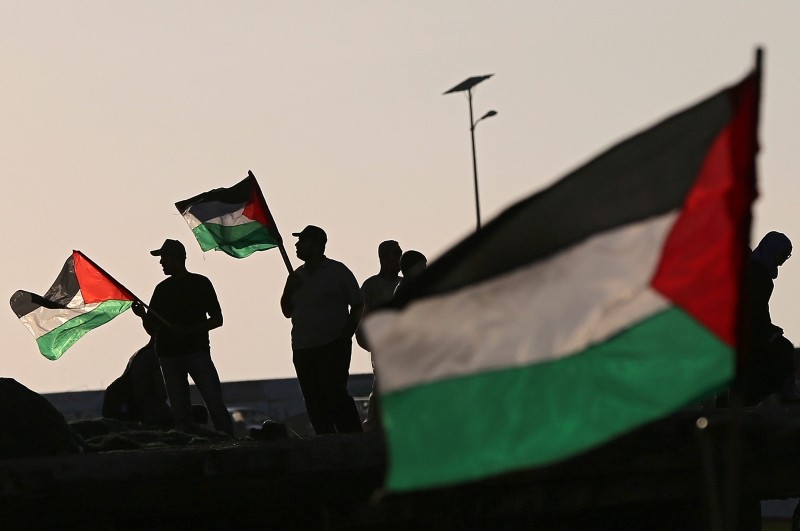 People holding Palestinian flags as they show their solidarity with a Gaza-bound flotilla during a rally in Gaza port in the west of the embattled enclave, 05 October 2016.
by Anadolu Agency Aug 05, 2018 12:00 am

The third freedom flotilla set sail from Gaza into the Mediterranean on Sunday to challenge the decade-long Israeli blockade of the embattled enclave, a Palestinian NGO said.

"We announce today the launch of the third cruise of the Freedom Boat," Bassam al-Manasra, spokesperson of Gaza's National Committee for Breaking the Siege, told a news conference held in front of the Gaza port.

He emphasized that the aim of the cruise is to show that the Palestinians have the rights to territorial waters off the shores of Gaza.

"The construction of a port linking Palestine to the world is guaranteed under international law," he added.

He called the flotilla a peaceful maritime demonstration against "Zionist terrorism."

While he did not specify the boat's route, previous flotillas set a goal of reaching the eastern Mediterranean island of Cyprus.

This year the NGO launched two cruises -- on May 29 and July 10 -- in an attempt to break the ongoing Israeli blockade.

Both were intercepted by the Israeli navy.

The Gaza Strip has groaned under a crippling Israeli blockade since 2007, which has gutted the coastal enclave's economy and deprived its roughly 2 million inhabitants of many basic commodities.

Since March, more than 157 people have been martyred and thousands more injured by Israeli army fire during the protests against the decadeslong Israeli occupation and 11-year blockade on the Gaza Strip.