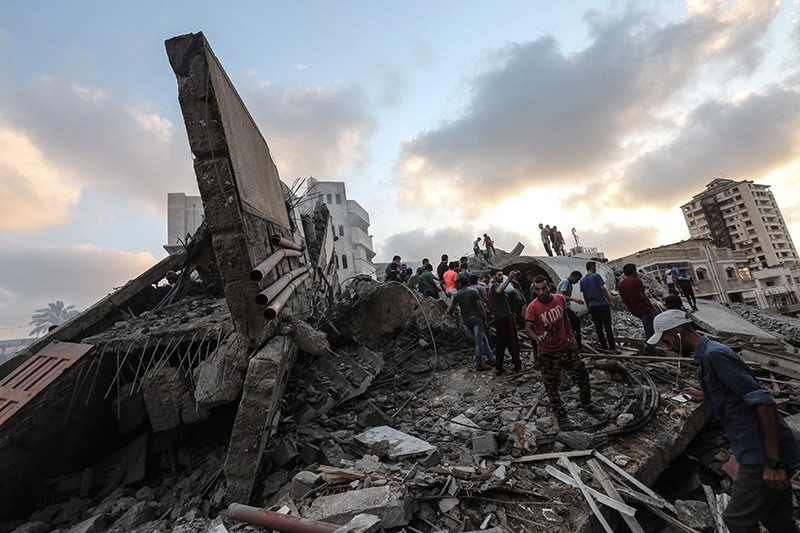 A picture taken on Aug. 9, 2018 shows people inspecting the rubble of a building following an Israeli air strike on Gaza City. (AFP Photo)
by Compiled from Wire Services Aug 09, 2018 12:00 am

At least 18 Palestinians were injured Thursday by an Israeli airstrike that flattened a cultural center west of Gaza City, according to Gaza's Health Ministry.

The ministry did not specify the seriousness of the injuries sustained.

According to an Anadolu Agency correspondent based in the area, an Israeli warplane fired at least 10 rockets at the Said Al-Mashal Foundation for Arts and Culture in the middle of the city.

The foundation confirmed on its Facebook page the offices in Gaza City had been destroyed, saying the building also hosted offices for the Egyptian community in Gaza.

Israel's military said the five-story building was used by Hamas's "interior security forces for military purposes." The building was not publicly known to include facilities for Hamas.

In recent days, tension has steadily mounted between Israel and Gaza-based resistance groups.

Earlier Thursday, three Palestinians -- including a woman and her 18-month-old baby -- were killed by an Israeli airstrike inside Gaza.

The Palestinian woman killed was 23-year-old Enas Khammash, along with her 18-month-old daughter Bayan, according to the health ministry.

They were killed in an air strike in Jafarawi in central Gaza, the ministry said, while her husband was injured. The ministry said Khammash was also pregnant.

A Hamas fighter was also killed in the overnight strikes and at least 12 others injured, the health ministry said.

"Bayan was sleeping with her mother and father. The rocket hit their house and smashed it, you can see the damage," said Abdullah Khammash, 31 and a cousin of the woman and child killed.

In a statement, the Israeli army claimed to have struck at least 140 targets across the Gaza Strip in recent days, going on to assert that Gaza-based resistance groups had fired 80 rockets into southern Israel -- 25 of which were intercepted -- over the same period.

According to reports in the Israeli press, a total of nine Israelis have been injured by rockets recently fired from Gaza.

It was the third major escalation since July and came despite attempts by U.N. officials and Egypt to secure a long-term truce between Israel and Hamas, the Palestinian movement that runs the Gaza Strip.

Nickolay Mladenov, the U.N. envoy for the Middle East conflict who has been seeking to negotiate a long-term truce between Israel and Hamas, said he was "deeply alarmed."

Protests and clashes along the Gaza border began on March 30. At least 165 Palestinians have killed by Israeli fire since then.