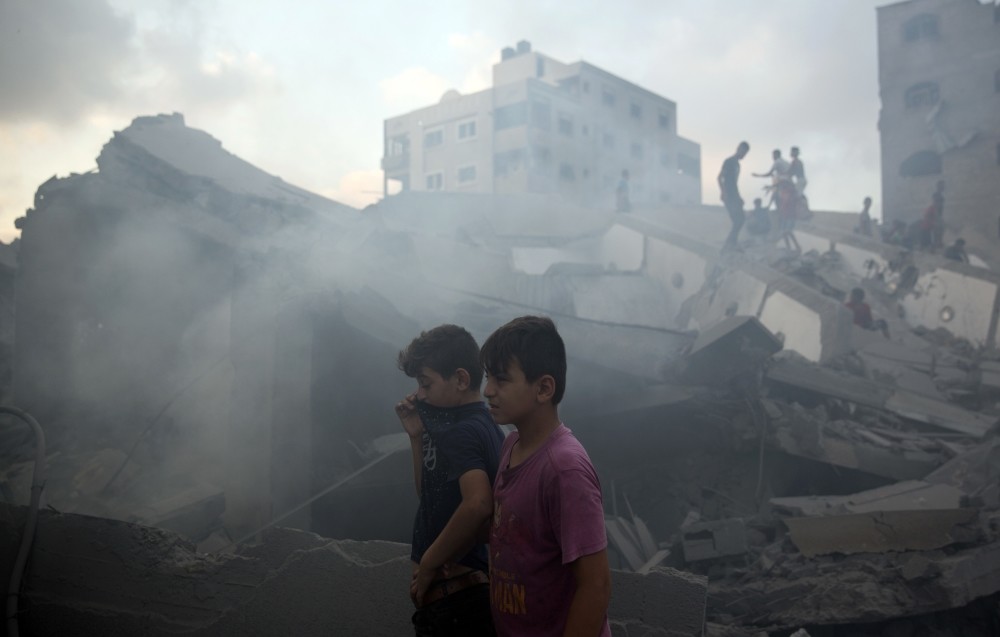 Palestinians inspect the damaged building of Said al-Mis'hal cultural center after it was hit by an Israeli airstrike, Gaza City, Aug. 9.
by Compiled from Wire Services Aug 11, 2018 12:00 am

Following months of escalating tensions that have led to the most serious flare-ups since the 2014 Gaza war, 64 percent of Israelis condemned PM Netanyahu's approach on the blockaded territory

Almost two-thirds of Israelis are unhappy with Prime Minister Benjamin Netanyahu's policies vis-à-vis the Gaza Strip, according to a recent opinion poll. The poll, results of which were published Friday by Israeli daily Maariv, shows that as many as 64 percent of Israelis are "dissatisfied" with Netanyahu's approach to the blockaded territory.

Since the escalation on Wednesday, Israeli aircraft struck more than 150 targets in Gaza. At least 18 Palestinians were injured Thursday by an Israeli airstrike that flattened a cultural center west of Gaza City, according to Gaza's Health Ministry. Earlier, a pregnant Palestinian woman and her 18-month-old child were killed in the Israeli attacks. It was the third major escalation since July and came despite attempts by U.N. officials and Egypt to secure a long-term truce between Israel and Hamas, the Palestinian movement that runs the Gaza Strip. The Israel-Gaza border was quiet on Friday after an Egyptian-brokered truce ended a surge in violence that had shaken southern Israel and the Gaza Strip for two days.

According to the survey, which was conducted by Panels Politics, a Tel Aviv-based consulting firm, 29 percent of respondents said they were "satisfied" with the prime minister's Gaza policy, while another 7 percent declined to give an opinion.

The poll also revealed a split among Israelis over recent calls for another large-scale military assault on the Hamas-run strip, with 48 percent saying they would support such an operation.

Forty-one percent of respondents voiced opposition to the notion of another major assault, while 11 percent declined to register their opinion.

According to Maariv, the survey included a random sampling of 512 Israelis with an error rate of 4.3 percent.

Israel and Hamas have come close to serious conflict in recent weeks after four months of violence along Gaza's border. Hamas has led weekly border protests aimed in part at drawing attention to the Israeli-Egyptian blockade imposed after Hamas took control of Gaza. Large turnout at the protests has also been driven by widespread desperation in Gaza, amid worsening conditions linked to the blockade. Power is on for just a few hours a day, unemployment has skyrocketed and poverty is widening.

Over the past four months, 163 Palestinians have been killed by Israeli fire, including at least 120 protesters, according to the Gaza Health Ministry and a local rights group. An Israeli soldier was killed by a Gaza sniper during this same period.

Protesters demand the "right of return" to their homes and villages in historical Palestine from which they were driven in 1948 to make way for the new state of Israel. They also demand an end to Israel's 11-year blockade of the Gaza Strip, which has gutted the coastal enclave's economy and deprived its roughly two million inhabitants of basic commodities. Israel was criticized by a U.N. human rights body for its killing of protesters in Gaza and treatment of Palestinians, declaring it a "war crime" under the Statute of Rome. The high casualty toll triggered a diplomatic backlash against Israel and new charges of excessive use of force against unarmed protesters.