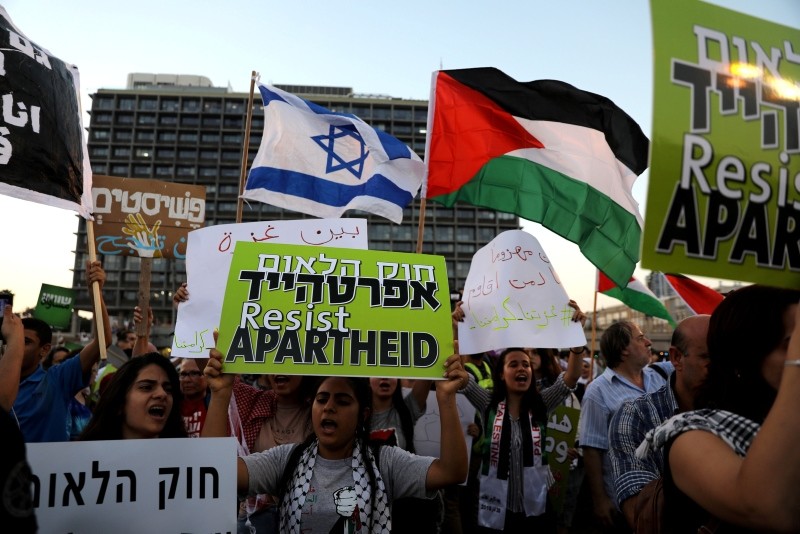 Israeli Arabs and their supporters take part in a rally to protest against Jewish nation-state law in Rabin square in Tel Aviv, Israel August 11, 2018. (Reuters Photo)
by reuters
Aug 11, 2018 12:00 am

Thousand of protesters rallied in Tel Aviv on Saturday against Israel's new law declaring it the nation-state of the Jewish people, legislation that has angered the country's Arab minority and drawn criticism abroad.

Prime Minister Benjamin Netanyahu has defended the law, which says only Jews have the right of self-determination in the country and downgrades Arabic from an official language, saying it is necessary in order to fend off Palestinian challenges to Jewish self-determination.

The protesters, mostly Israeli Arabs, waved Palestinian flags and held up signs that read 'equality' in Arabic and Hebrew.

"The law legitimizes racism," said Laila al-Sana, 19, from a Bedouin village in Israel's southern Negev desert. "It's very important to show we are here, to resist," she said.

Israel's Arab population comprises mainly descendants of the Palestinians who remained on their land after the 1948 war at the time of the creation of the modern state of Israel. Hundreds of thousands were forced to leave their homes or fled.

Many of Israel's Arab citizens also identify as Palestinian. They make up about a fifth of the state's 9 million people. Israeli law grants them full equal rights, but many say they face discrimination and are treated as second-class citizens.

"When I heard about the law I felt I should defend my hometown, our land, the land of my ancestors," said 68-year-old Sheikha Dabbah at the rally.

Largely declarative, the law was enacted just after the 70th anniversary of the birth of the state of Israel.

It stipulates that "Israel is the historic homeland of the Jewish people and they have an exclusive right to national self-determination in it". It also downgrades Arabic from an official language alongside Hebrew to a "special status."

"I feel ashamed that after 70 years I have to accentuate my nationalism instead of being generous towards all those who live here," said Gila Zamir, 58, a Jewish Israeli from the Arab-Jewish city Haifa.

Netanyahu posted on his Twitter page a video from the demonstration of a few protesters waving the Palestinian flag and chanting: "With spirit, with blood we shall redeem you, Palestine" and wrote: "There is no better evidence of the nation-law's necessity." Separate TV footage showed a few Israeli flags being waved.

Critics have said the new law is undemocratic because it differentiates between Jewish and non-Jewish citizens. Its defenders say civil equality is guaranteed in existing legislation.

Arab leaders in Israel have said the law verges on apartheid. Rights groups and Jewish groups in the Diaspora have spoken against the legislation, as have the EU, Egypt and Israel's own president.

Last Saturday a protest against the law by Israel's Druze community, which numbers about 120,000 citizens, drew a far larger crowd.

The Druze are ethnic Arab members of a religious minority that is an offshoot of Islam incorporating elements of other faiths.

Their outrage over the law has had more resonance in Israel, despite their small numbers, because of their reputation as loyal supporters of the state. Unlike the wider Arab population, many Druze serve in Israel's conscript military and security forces, and some have risen high in the ranks.

Druze leaders have voiced a deep sense of betrayal over the law, striking a chord among many Israelis. However, efforts by Netanyahu to appease the Druze community have so far failed.