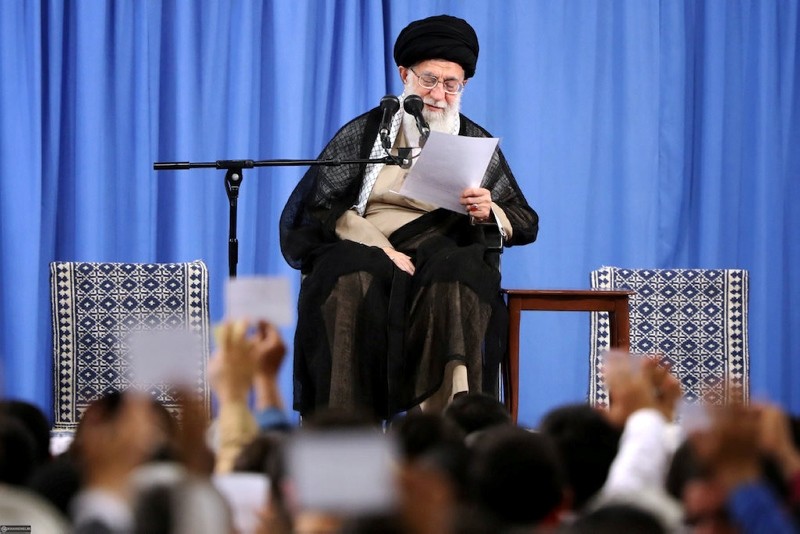 "I ban holding any talks with America ... America never remains loyal to its promises in talks ... just gives empty words ... and never retreats from its goals for talks," Khamenei was quoted as saying by TV.

Khamenei's comments add to the pressure on President Hassan Rouhani following a collapse in the currency and widespread protests over high prices and corruption.

They also appeared to rule out any hope of fresh talks with Washington following Trump's withdrawal from the landmark 2015 nuclear deal and reimposition of sanctions last week.

"Recently, U.S. officials have been talking blatantly about us. Beside sanctions, they are talking about war and negotiations," Khamenei said via his official Twitter account in English.

"In this regard, let me say a few words to the people: THERE WILL BE NO WAR, NOR WILL WE NEGOTIATE WITH THE U.S."

With the nuclear deal crumbling, Rouhani finds himself with little to show for his five years in power and increasingly under fire from all sides.

Although the other parties to the agreement -- Britain, France, Germany, China and Russia -- have vowed to resist US sanctions, many foreign companies have already abandoned projects in Iran for fear of US penalties.

A significant cut in oil sales is also expected when the U.S. reimposes a second phase of sanctions in November -- with some analysts estimating a drop of 700,000 barrels per day from its current level of 2.3 million.

State news agency IRNA reported on Monday that Iran is offering oil and gas at a discount to Asian customers in a bid to retain sales.