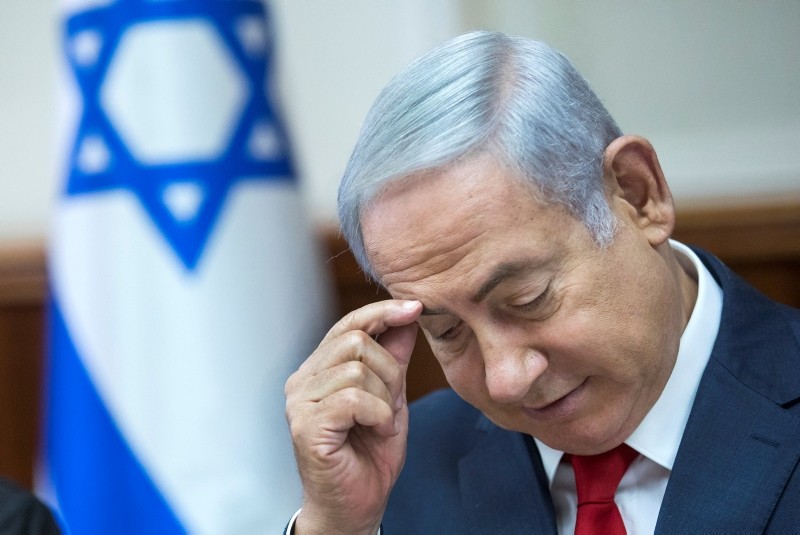 Israeli Prime Minister Benjamin Netanyahu on Tuesday slammed the head of Britain's Labour Party, Jeremy Corbyn, for attending a 2014 ceremony that is said to have honored the Palestinian perpetrators of the 1972 Munich Olympics massacre.

"The laying of a wreath by Jeremy Corbyn on the graves of the terrorists who perpetrated the Munich massacre and his comparison of Israel to the Nazis deserves unequivocal condemnation from everyone - left, right and everything in between," Netanyahu wrote in a tweet on Monday.

Speaking to Britain's Sky News, Corbyn said he was present at the wreath laying "because I wanted to see a fitting memorial to everyone who has died in every terrorist incident everywhere."

In a tweet on Monday, Corbyn called the prime minister's accusation "false."

The Labour leader said Israel's killing of Palestinians during protests along the Gaza border in recent months is "what deserves unequivocal condemnation."

Netanyahu's comment could also be considered hypocritical as the Israeli leader was previously criticized by Britain for celebrating Jewish terrorists whose attack led to the death of 91 people, including 28 Britons in 1948.

On July 2006, Netanyahu attended a plaque laying event commemorating the attack by Irgun fighters on King David hotel in Jerusalem.

The plaque read: "The hotel housed the Mandate Secretariat as well as the Army Headquarters. On July 22, 1946, Irgun fighters at the order of the Hebrew Resistance Movement planted explosives in the basement. Warning phone calls had been made urging the hotel's occupants to leave immediately. For reasons known only to the British, the hotel was not evacuated and after 25 minutes the bombs exploded, and to the Irgun's regret and dismay 91 persons were killed."

Corbyn, on the other hand, has come under fire for months from critics, including his own lawmakers, who accuse him of failing to tackle anti-Semitism within the Labour party.

The latest row over anti-Semitism accusations by the U.K.'s Israeli lobby arose over Labour's refusal to accept the full text of the working definition of anti-Semitism produced by the International Holocaust Remembrance Alliance (IHRA).

The party expressed concern over creating a code of conduct that could be "used to deny Palestinians, including Palestinian citizens of Israel and their supporters, their rights and freedoms to describe the discrimination and injustices they face in the language they deem appropriate."

Corbyn signaled that three of the four IHRA examples of anti-Semitism would be added to the party's code of conduct, namely "comparing contemporary Israeli policies to those of Nazis," "suggesting Jewish people are more loyal to Israel than their home country" and "holding Israel to different standards to other democratic countries."

But Corbyn also signaled that he would continue to reject the fourth example: "Denying Jewish people have a right to self-determination-for example by claiming that the existence of a state of Israel is a 'racist endeavor'."